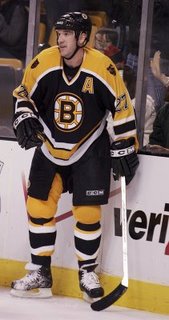 2) Ted Purcell is 22 years old and was the AHL rookie of the year last season. He plays right wing.

3) Brad Richardson is 23 years old and is incredibly fast and a solid penalty killer. He plays right wing.

4) Derek Armstrong is 35 years old and is the eldest member of the team. He had more points than Glen Murray last season. He will probably play right wing on the 4th line and has a game that translates well to that role.

5) Oscar Moller is 19 years old and could potentially break into the line-up this season or next. He plays right wing.

6) Wayne Simmonds is 19 years old and will probably slot into the right wing either this season or next in a bottom-six role.

7) We already traded away Glen Murray once.

11) Glen Murray curiously fell off a cliff when that one big guy left Boston.

12) He probably voted for Andrew over Elvis on Greatest American Dog.*

13) The Kings already have Kopitar, Brown, Frolov, Boyle, O'Sullivan, and Stoll set on the power play, the one area where Murray has a modicum of value.

"I liked Glen Murray when he was on the Kings and I’m sure he’s a pleasant enough guy, but I’d rather eat a baby than have him on the Kings for the next two years."


*Seriously, that was fucking horse shit. Bella Starlet is obviously retarded and Laurie cheated with Andrew (yeah, it's perfectly fine to open a giant fucking hole in the hoop, that's not illegal at all), but Elvis loses? Sure, he fucked up a little because David sucks ass and wouldn't take him off the leash, but he rocked the little cross thing. And Laurie fucking sucks for ratting out Elvis for biting a few dogs. I hope she dies of gonorrhea and burns in hell. Fuck!