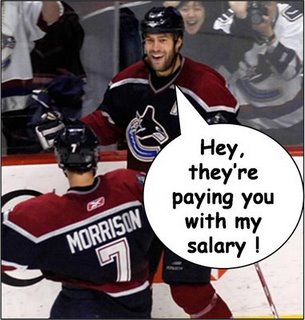 UFA forward Brendan Morrison reportedly is signing a one-year contract tomorrow with the Ducks. I haven’t heard the salary figure [UPDATE: TSN says 1 year, $2.75 M; thanks Mike in OC!], so I won’t get detailed into budget repercussions just yet. Still, here's three marginally useful thoughts I had:

B-Mo was once part of a trade for Alexander Mogilny. It’s not that significant, really, but for some reason I sort of enjoy knowing about young brushes with greatness, like when Pahlsson was traded for Ray Bourque. What’s actually meaningful, though, is that Morrison debuted as a New Jersey Devil. He knows his defensive responsibility, that’s for sure, and may even have a reunion of sorts with Scott Niedermayer.

B-Mo, of course, centered the West Coast Express. The Yankee Canuck wrote a timely tribute post to the members of that high-flying line (including a link to Morrison scoring a triple-OT goal), and I couldn’t resist quoting this ironic part: "We all share in common the wonder of what could have been if (a) Dan Cloutier and (b) Marc Crawford had been just a shade better at their jobs..." The Humming Giraffe is going to miss B-Mo as well. Between all-star scoring wingers Naslund and Bertuzzi, Morrison was a more-than-serviceable centerman who not only chipped in points, but largely served as a defensive conscience for the line as well. To put it in 90s Ducks terms, B-Mo served as the "Rucchin" of that line.

Overall, I’m pretty excited; Morrison represents a much-coveted top-six forward. I can’t call it a "great" signing until I know what the salary is, but I think Morrison fits fabulously roster-wise. Getzlaf-Morrison-Pahlsson-Marchant/Carter is a pretty solid set of centers (especially if Getzy decides to win some faceoffs). This team still looks to be short a Selanne up front, but generally I like where this Burkie swan song team is headed.

Of course, it should be recognized that so far this offseason, Ducks fans have only seen the pleasant side of summer business. Until now, it’s been all roses. Good players have been brought in or re-signed (Niedermayer, Perry, Morrison, Hiller), and less-good players have been let go (Weight, Bertuzzi). It’s about time to brace for the harder choices—getting rid of good players. If it means a final year of Pronger and Niedermayer, though, I’m fully aboard.


* Also acceptable is "the Jerk-Ass", but you have to say it kind of funny and make it rhyme with "circus".
** Patterned after the "K-Rod" nickname given to Angels phenom Francisco Rodriguez.