Share All sharing options for: Bobby Ryan Looks To Show He's The Right Man For The Job in Anaheim 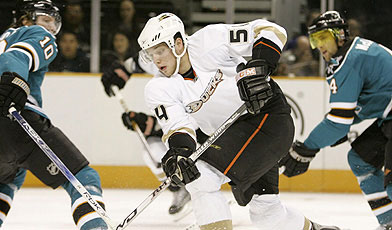 Recently within the Anaheim Ducks organization Bobby Ryan has begun to catch a lot of attention. It originally began with the free agent market with those analyzing the Ducks depth chart began to expect Ryan to be placed in the lineup full time this year, rather than have him split time between the Ducks and minor leagues.

Until lately I was pleased with the slow going development of Bobby Ryan, until Kevin Lowe made comments about the young Duck recently as a jab at getting a rise out of Ducks GM Brian Burke.

Lowe said that Ryan was a "questionable pick", but my question is why does he even care? That is for the Ducks to worry about, and the Ducks organization seems happy with Ryan’s development.

Personally, I’m very pleased with Bobby Ryan’s development. I don’t believe in putting a rookie, regardless of his talent, instantly in the lineup. That’s a lot of pressure. Ryan has developed enough with split time between Portland and Anaheim to do well enough to be expected to pull a regular shift on the second line.

Not bad for a questionable pick if you ask me.

I am not writing this article to shake up more issues regarding Lowe’s comments, but instead to raise knowledge of the 2005 second overall draft choice.

The 21 year old, 6’1" 218-pound Right Wing was born in Cherry Hill, New Jersey and was drafted out of Owen Sound of the OHL in 2005, right behind Sidney Crosby. Regardless of who you are that’s hard company to keep.

Brian Burke believes in development of draft picks, much like I do, and even with a pick such as Crosby would have probably made him find his way in the minor leagues. Ryan did exactly what Burke and the organization have asked of him, split your time, produce, and grow as a player.

With a second line spot open for Ryan on the depth chart he will look to capitalize on the great year he had last year. Ryan appeared in 23 games, scoring five goals, (three power play) and five assists for 10 points. Ryan also recorded six penalty minutes in those 23 games.

During the playoffs Ryan found himself back in Portland with the Pirates who themselves were chasing a championship. In 16 AHL playoff appearances Ryan led the Pirates in points with 20.

For Bobby, he finds himself with a spot with his name on it on the depth chart. Not many guys heading into camp who spent half the year in the minors ever get to say that, and far fewer see their name on the second line.

There are extremely high expectations for Bobby, with Lowe having called him out now would be the perfect time for Ryan to show the Ducks, and the rest of the NHL what he is really made of. With the youth movement in the forward lines in Anaheim it’s a great time to be a Duck fan.