Oh fuck I am excited. I got the keys to my new place in Irvine yesterday, and camped out there last night for a blessedly short commute to work this morning. 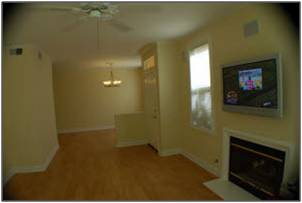 This is the cleanest this place will ever be.

At any rate, I am doing a "staged" move, regularly running a Prius-load of belongings from my old place Redondo as part of my daily work commute. Once most of the small stuff is down in the new place, I'll get a U-Haul and move some of the bigger pieces. During this two-week-or-so stretch, expect Sleek to be much more a BoC commenter than a poster, unless Schneider gets traded or Selanne gets signed (or Sleek gets excessively bored with moving).

I haven't been an Orange County resident since summer 2001. It's only been one night, but damn it's nice to be back in Ducks territory.