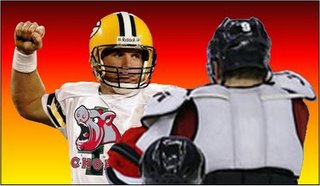 Favre the enforcer? It might be his best option.

Well, I’m late to the show on this story, but I guess in a quest for Midwest relevance, the Ducks’ new AHL affiliate the Iowa Pigs have offered a contract of some unknown capacity to former NFL great Brett Favre. Now on the face of things, this is a more ridiculous idea than even the Kings moving to Kansas City, and I’m not even sure the relevant question is "Can Brett Favre play hockey?", but what the heck? It’s a summertime story.

Now I really don’t have a ton to say about this marketing gimmick, because even though this is a somewhat Ducks-related story, I may be one of the least-knowledgeable internet voices on the subject.

So, from my seat of ignorance, I don’t know how well to commend or condemn the new Iowa ownership for their certainly brazen gimmick; if it generates enough buzz to get more eyes on Pigs Hockey, probably it’s a good idea. Still, what’s next for the Iowa Headline-Makers? What other former athlete, now estranged from the sport that made them famous, could help bring this club to local prominence?

Barry Bonds on the blueline? Michael Vick on the wing? Let’s get some suggestions to help put this Pig club on the map.