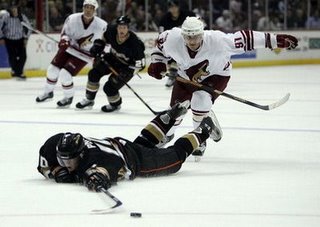 I still think that he dove, though.

Well, as anticipated, Corey Perry is signing a Getzlaf-like contract this morning (Per TSN, it's for the exact same salary cap hit for the same five-year period, but it's structured at $4.5M, $6.5M, $5.375M, $5.375M, and $4.875M). It's pretty fitting that his contract mirrors Getzlaf's: these two kids were born 6 days apart and drafted 9 slots apart, and except for injury, have played every NHL game together they could have except one (G1 last year in London). They're like a less creepy set of Sedins.

I won't talk too much about Getzlaf's impact on Perry, as I think it's evident enough and there aren't really that many games to point to with Perry on another center's wing. I did, however, want to take a look at the third member of the Getzlaf-Perry line, and how that rotated individual seemed to affect Perry's stats.

To do that, I went to Vic Ferrari's NHL Head To Head 5v5 Icetime site, which tracks overlapping ice time for 5-on-5 situations only. For each of Perry's games where he was centered by Getzlaf (66 regular season and 3 playoff), I recorded which winger he shared the most ice time with. Then I went back to my own spreadsheets and calculated Perry's even-strength performance for each of those games. It's a bit imprecise, in that I didn't actually track each goal according to left wing (rather each game according to left wing), but I think it tells enough of a story, which may be a bit surprising.


Basically Chris Kunitz and Todd Bertuzzi traded turns playing on Getzlaf and Perry's wing all season, but in five games a different Duck assumed that duty (Sutherby x3, May, and King; I'd classify them all as "bangers"). You can see that Kunitz definitely trumped Bertuzzi in terms of helping Perry's even-strength defense, but look at how well Perry did with an actual banger on his line. Granted, it's a small sample and may have been self-fulfilling (Carlyle plays Sutherby on the top line only in games he is likely to flourish), but I think there is a lesson somewhere in there.

Since they emerged in the league, Getzlaf and Perry have always seemed to thrive with a third linemate banger, who was less about footspeed or stickwork and more about bodychecks. Todd Fedoruk, Brad May, Dustin Penner, Brian Sutherby, and even Jason King have filled that role at times. It's a win-win relationship, when it works: a banger can generate space for Getzlaf and Perry that helps their production, and at the same time a scoring winger like Kunitz can help balance a second line. I really don't know if the production numbers are sustainable, but if I were Carlyle I might try starting Sutherby or May on the top line next year. It may backfire, but if Getzlaf and Perry can make a fourth-line winger contribute on the top line, then a lot of forward-depth problems go away.

Anyways, some food for thought. Back to the main point, glad you're on board, Perry. Don't take this the wrong way, but I'd hate the hell out of you if you wore any of 29 other uniforms.