(Alexander Dubcek is a Kings fan and a filthy commie. Here's his take on rumor mongers and the shitty trade proposals they shit out. Shit.)


Dear Rest of the NHL Universe,

Hi. You've probably forgotten about us. I can't blame you. We haven't done anything to warrant your attention in a few years, except when you pause for a moment to ponder the lottery (which we always manage to screw up one way or another). 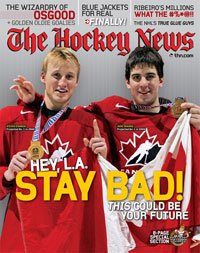 It's easy to make a joke of hockey in L.A. (Just look at our abysmal record over the past, oh, forty-one years.) Kevin Lowe takes a potshot at the Ducks, but no one notices the Kings. We're too pathetic to be called pathetic. You can't be arsed to expend the effort to belittle us, even though Kings fans might more fairly be called "pathetic" for shelling out big bucks to turn out in droves (more than 94 percent of capacity) for the train wreck known as the Brian Willsie Experience and the Kevin Dallman Project.

Not that I'm complaining. We're a sufficiently self-hating bunch that we can bemoan and belittle our own foibles without any outside help, thank you very much.

No, the bigger problem comes on those rare occasions when folks from hockey "hotbeds" and "traditional" markets actually try to say something about us.

Plenty of rumors get bandied about in the offseason, some of which even involve the Kings. It's about the only time we register on the radar of media types outside L.A. But Canadian writers, East Coast writers and commenters all around the league don't bother to do their homework on reporting these rumors. (Is it too much to ask to check out Rich Hammond's site to check your crackpot theory?)

So we get things like the New York Post speculating Sean Avery could re-sign with the Kings with Marc Crawford canned. (Never mind that Dean Lombardi, who put Avery on "double secret probation" at the beginning of Avery's last season in L.A., is still calling the shots as GM.) Or all the wild "Malkin to L.A." rumors before the draft (a great move for a team sorely in need of defense, rather than offense).

"But I am hearing Kopitar and a prospect is from the Kings."

"If the Kings are giving up Kopitar and a prospect they better be getting something serious in return and if they aren't lets cut Chicago out of the mix and just get Kopitar..."

""I can't see them moving Kopitar either. Frolov maybe???"

"Ottawa gets loaded somehow. Chicago unloads salary and gets some good player value in return. Spezza's 7 mil contract helps LA get closer to the cap and also gives them a potential superstar talent in return plus they get a prospect and pick out of it too."

So, please, Ottawa, Edmonton, New York, and all other parts north and east of L.A. -- if you're just going to pull these rumors out of your ass, do us a favor and keep ignoring us.

To paraphrase an old axiom: If you don't have anything intelligent to say, you shouldn't say anything at all.

Why do we as fans hate bad trade proposals so much? It could be that we're just offended by the sheer stupidity of them, or we're upset at the lack of respect the player on our team receives, but I don't think that quite explains it. I think I get upset because I am presented with a world where the Kings don't have that player. That's okay when it's someone like Armstrong or Preissing, but when it's someone like Johnson I get scared. I'm scared because I'm confronted with the reality that someone like Kopitar or Brown or Robitaille or Hrudey will not be a King forever, that time will pass and that someday they'll be gone. I know Kopitar won't be on the Kings forever, but I don't want to think about it for the same reason I don't think about my parents' deaths. It's legitimately terrifying to me, and I cannot help but react violently to it. Rationally, I know these trade proposals are all bullshit and they wouldn't happen in a million years, but that irrational lizard part of my brain can't help but respond. I avoid sites like HockeyBuzz not because they're retarded (and they are), but because if I read them I'd probably suffer a stroke within the week. It's easier for me to just say, "Fuck you!" than actually consider the proposal and its consequences. So, fuck you, I guess.