I'm Reading Too Much into This

Share All sharing options for: I'm Reading Too Much into This 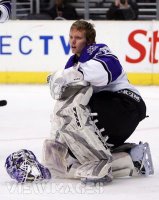 
1) They're not in love with him like all Kings' fans are. Ersberg played amazing at the end of last season. He had a 2.48 GAA and a .927 SV%. But he's still 5'11" and a butterfly goaltender and I think the Kings are cognizant of the fact that Ersberg won't be that good next year.


2) They don't want to get screwed like they did two years ago. Dean Lombardi learned the hard way what happens when you aren't flexible and it bit the Kings in the ass. Giving Ersberg a two-way deal allows Lombardi to test out either Bernier or Ersberg while still having Ersberg as an option if they should falter or get hurt.

Eyes are tricky things. We all watched Ersberg dominate at the end of last year and we assume he's a great goaltender, but he's not. In 14 games for the Kings, he was great; in 30 games for the Monarchs, he sucked. You can try to explain it by saying that he stepped it up or some other Real World: The Gauntlet bullshit, but it's not true. Ersberg got lucky and Lombardi knows it. Ersberg will probably spend a good amount of his time either backing up Labarbera (who people keep forgetting had a good year) or in Manchester. Believe me, I'd like it if the smaller Ersberg was able to beat out the fatass Labarbera, but people don't win spots because they try harder. Labarbera is better and Bernier is the future, and that's who the Kings will go with. Sorry, Erik.