Two years ago, the Anaheim Ducks won the Stanley Cup thanks to George Parros' moustache and Brad May's right fist. Since then, the other teams in the Pacific have gathered their own eclectic mix of goons, ruffians and whelps to combat the OC menace. Last year the Pacific was the best division in hockey and this year I think it'll be the fightingest. Since there's not much going on these days, I thought it'd be fun to take a look at the fighting prospects of the teams in the Pacific, broken down by role. Be warned: these are my fight roles and they're complicated and more than a little insane, so try to keep up. 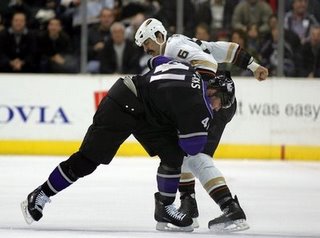 Goons are guys who play about 5-7 minutes a game and don't really have an impact. They'll skate around and hit someone, get knocked down and then square off with a fellow goon to give the masses a little excitement. It's awesome. Every team has a goon except Dallas, who have a couple of tweeners to do their dirty work. The Kings have the best enforcer because Raitis Ivanans is 1) the best hockey player of the group, and 2) Ivanans isn't keeping someone good out of the line-up like everyone else. Brian McGratton is the new guy in Phoenix and I imagine he'll fight a lot in the beginning. Jody Shelley sucks.

Tweeners are like goons but smaller and better at hockey (though still not good). They fight well and usually beat up on lesser fighters. Brad May pretty much sets the standard for tweeners in the NHL, as he can fight any weight class and do some damage with hooks and slashes as well. Barch and Winchester teamed up to fill the role in Dallas, although I'm not sure if they're going to make the team. Crombeen might take their slot next year and he's pretty fucking crazy. Scott Thornton did fill this slot for the Kings, but he retired. Brian Boyle will probably try to take that role next year. 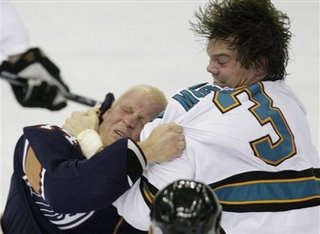 Avengers and tweeners are similar, in that they're both light heavyweights, but the difference is that the primary role of an avenger is usually hockey-related, not goon-related. Avengers fight when a teammate has been wronged and usually kick ass. Doug Murray excelled at this last year, often coming to the aid of any teammate that had his knee messed with. (Doug Murray hates it when people get kneed.) Matt Greene comes in to fill the role for the Kings this season, while Sean O'Donnell will continue fighting in defense of his teammates in Anaheim. Brendan Morrow is excellent at this role, but he's probably too good a hockey player to fight too much. Phoenix had two players that defended their teammates last year, Nick Boynton and Keith Ballard, but they both left in the Jokinen trade. Someone is going to have to step in and fill that void for them. Criag Rivet also protected San Jose last year, but he's gone now so they can have Rob Blake shoot 9,000 feet wide of the net. 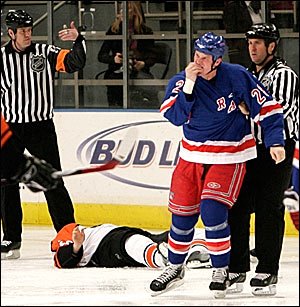 Punching bags are sacrificial lambs. When someone on their team does something that goes against the code, these men are usually sent out to get their asses kicked in order to end the retaliation. They'll fight anyone and usually lose, but at least the important players on the team are spared. Todd "Ow my face!" Fedoruk is the standard in punching bags, but every team besides the Kings and the Stars have one on their team. Brian Sutherby probably doesn't belong here because he usually starts fights; he just kind of sucks at it. 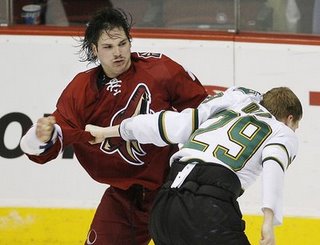 These guys are like goons except they usually skate a regular shift. Their job isn't primarily fighting, it's more annoying-related. Lots of stick work, lots of trash talk. They are usually held accountable sooner or later, fighting mostly each other or avengers. Danny Carcillo is the cream of the Pest crop because he's fucking insane and will fight anyone. Avery and Ott will form a dynamic duo of douche baggery in Dallas, making up for Dallas' lack of a straight Goon. Corey Perry isn't so much a pest because he's good at hockey, but he's a little bitch nonetheless so he goes here.

So that pretty much runs down the people you're going to see fighting in the Pacific. Overall, the Ducks still have the best fighters in the division, but the Stars have a variety of people to throw out there if things get crazy. The Kings and Sharks are basically only avengers and 1 goon each, while the Coyotes have two goons, big and small. The Pacific Division is shaping up to be the fightingest division in hockey next year and it's going to be awesome.