Letter From a Sharks Fan

Share All sharing options for: Letter From a Sharks Fan

Greetings, fellow hockey fans! I'm John Tanabe and I'm one of the bigger San Jose Sharks fans you'll find 'round these parts. Some people might be surprised that the Sharks have such a knowledgeable and sizable following, but actually we have one of the best fanbases in the league. Have you seen it? You should, it's true. I swear. Anyway, the Sharks have had a little trouble getting over the hump in their long and storied history, but we're sure to win the championship this season. I'd be willing to bet my '89 bottle of cab franc on it, and it's quite expensive! 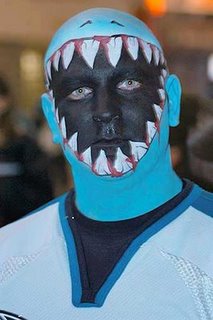 I've been a season ticket holder since all the way back in '96, except for a few years at the turn of the century when I had a little cash flow problem thanks to the bubble burst. (I honestly thought pets.com was going to last forever.) They do a great job making you welcome at the "Shark Tank": free wifi, special parking for my Prius, and the tofu! Oh god, the tofu! It really is a modern paradise. The fans really do a great job of making the place great, too; did you know that the Sharks have some of the best fans in the NHL? It's true. One Toronto fan told me, "You guys are just like Canadiens fans," which I'm pretty sure he meant as a compliment. Look at how well-received Brian Campbell was when he came here for the stretch run! It was great and was in no way pathetic at all. 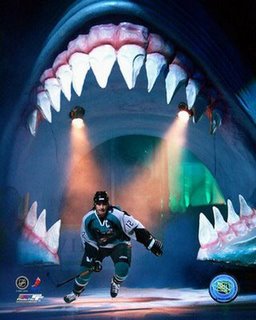 Trying to pick a favorite player of mine is obviously difficult because the Sharks have so many great ones. My first love was actually Owen Nolan, especially when he pointed before his shot against Dominik Hasek in the All-Star Game. (Did you know that was in San Jose? We did a great job setting that up.) Today my favorite player is definitely Evgeni Nabokov. I can't believe he didn't win the Vezina this year, he totally got jobbed! I mean, I know Brodeur had a better save percentage and the Sharks had the 2nd fewest shots allowed in the league, but, uh, Nabokov should have won anyway. You see, they allow good shots, but they don't allow bad... if you'll see this chart... boy, this wine sure is good. 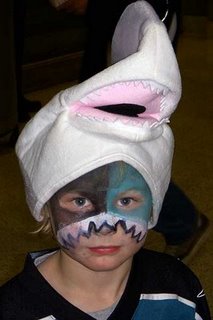 Alright, I'd better get going, I have to fix a bug in our system before my ignorant boss throws a fit. (He's a Ducks fan.) I'm glad I was able to inform you about how much you're missing by not being a Sharks fan. I have to go to meet a couple compatriots of mine for a hockey game (we're testing out NHL '09) so I'll catch you guys later. Look for me: I'll be the guy looking down on you from the top of the standings. Haha, zinger!