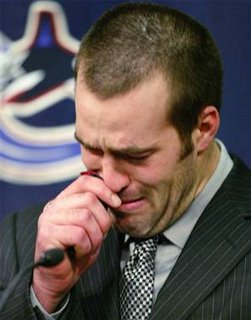 Could you blame Bertuzzi if he hated hockey?

I'm one of those guys that cares too much about sports. And considering the fact that you are reading this post, you probably care a little bit too much as well.

Sometimes, it's important to remember that in a lot of cases, fans simply do care more about the outcome of a game than most of the players. Sure, fans don't have to take cortisone shots to numb the pain that comes with going from shift to shift and game to game; a lot of us simply live and die with every save and every goal.

But as I beat up on Todd Bertuzzi and Rudy grits his teeth when Jordan Staal gets nominated for a Calder over Anze Kopitar, it's pretty amusing to think that a lot of these athletes would roll their eyes or pull our shirts over our heads and gives us a beating for being such sports nerds.

The (typically) tragic story of James Felton is one of those sports stories that "puts things in perspective" and is generally a fascinating read.

According to Rana, the criticism fueled her husband's drinking. And it mixed badly with a secret no one in the neighborhood or gym knew. For as long as she'd known him, Rana says, Felton didn't like basketball. Didn't like playing it, never watched it, tried to avoid talking about it. He didn't even own a ball. "James lived in denial about basketball," she says. "Every day, he'd pretend it was something he liked. It ate him alive. Having to do what you don't want to do will make anyone sick."

It won't stop me from making cheesy and unfair jokes. And it won't keep me from being endlessly fascinated about a glorified children's game.

But it is funny to realize that a lot of these guys could give a rat's ass what we think (or are more interested in that cougar in Row 3 than a "must win game").