Nadal, Federer and the need for legitimate winners

Share All sharing options for: Nadal, Federer and the need for legitimate winners 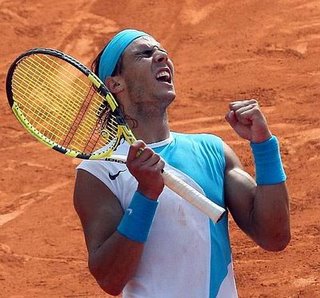 
I don't consider myself a tennis fan, but my friend and I were lucky to stumble upon today's Wimbledon final where Nadal finally bested Federer in the longest Wimbledon final ever. The ridiculously close match made me think of those unforgettable marathon OT games in the NHL playoffs.

It compels me to say that sudden death overtime is the only way a playoff hockey game should ever be decided.

Gary Bettman and his team of buffoons can fumble perfect marketing opportunities, bungle year-long strikes and allow the league to expand to places where ice barely exists, but they must not be allowed to ruin the playoffs.

Pittsburgh - Detroit was a classic. San Jose - Dallas was pretty damn amazing. And the tennis equivalent of a multi-OT game was compelling to even the most casual observers. Let that be a lesson to the NHL.

Please, don't fuck this up.