Share All sharing options for: Over-rated! (in video games)

Jay Bouwmeester is fucking fast. And he skates like a god damn gazelle.

I say this without the experience of actually watching him play in games. How do I know this, so irrefutably? 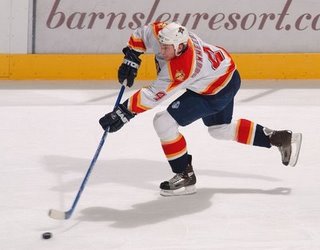 
Because damn if the guy isn't the closest digital equivalent to Bobby Orr in hockey video games - whether its the 2K series or the EA Sports ones. This fact is made all the more glaring since there really aren't any true threats to his polygonal skating throne (the closest competition would probably be Sergei Gonchar, Sergei Zubov or former Rudy Kelly lover Luber Visnovsky).

So, it is to my great game playing excitement that most hockey pundits are labeling Bow-monster the next Brian Campbell.

Can you imagine what his unparalleled digi-speed and agility could do on a team that, you know, someone would voluntarily watch on TV? What his almost-Afinogenov-like skating would do for a team like Anaheim* or Pittsburgh* or Detroit* or Ottawa*?

At a reasonable 84 this year, it seems like Bouwmeester's rating is actually moderately accurate in NHL '08 (although, answer me this question if you're one of the 5 people who follow the Panthers: is he really that fucking fast?). But year after year he's one of those guys whose "potential" rating made him become a 90 by the age of 25** so I almost wonder if his rating will eventually suffer some residual negativity.

Anyway, this is off the top of my head, but here's a list of players who are comically overrated in hockey video games - with their ratings in parenthesis. Naturally, this is a pretty quick list, so lemme know some obvious ones I've left out in the comments:
I mean, at least Lindros was on The Legion of Doom line.
But there's also the Yashin effect in games: video game rating makers feel sorry for fans of teams who sign players to albatross contracts and "give 'em a little boost." And why not, really? Those poor fans are the ones that ultimately have to deal with that terror (since GMs typically just pack up their office and move on to a different job).

Rick Dipietro and The Bulin Wall (to a lesser extent) are both well above average goaltenders. But in NHL '08 these guys are equal or even better than J.S. Giguere, Ryan Miller and Henrik Lundqvist. Something tells me that, big contract or not, the Kings would probably want to trade for Khabibulin if he was anywhere near Lundqvist's level.

* - Teams I arbitrarily picked out of a hat for being "potentially good" and maybe, somehow having some serious cap space next summer.

** - The early "franchise modes" of video games really went over the top with these "potential" ratings. If the NHL really worked that way, Gilbert Brule would be a few steps behind Evgeni Malkin and Andrew Raycroft would now be Roy 2.0. It seems like that trend is dying off now, although the creatively devoid Madden series really needs to cut that "team full of 99s" bullshit.

*** - It probably needs to be stated that, for this study, I'm only referring to NHL 08. Because the 2K series might as well cease to exist.