Share All sharing options for: Versus CamPain 08 - thirty two athletes battle for the title "Toughest Athlete of All-Time"

Not to be confused with Deadspin's Sports Human of the Year contest, shockingly won by Barbaro in a come from behind tour de force in 2006, Versus kicked off election season early launching CamPain 08. Thirty two athletes will battle amongst the viewing public in a virtual toughman contest to decide "which athlete best represents a lifetime of determination, competition, domination and tradition".

The initial list of nominees sans any write-in candidates is a little unusual. Recently "un-retired" Packers quarterback Brett Farve gets the nod over legendary players like Jack Lambert, Lawrence Taylor, or Dick Butkus. San Francisco 49'ers safety Ronnie Lott was righfully included in the top 32. Despite amputating part of his left pinky after it was crushed in a hit, Lott helped the Niners win four Superbowls and eight division titles. The Bay Area Sports Hall of Fame inductee regularly used the crowd to gauge how big one of his pancake tackles was. If fans responded with a chorus of "ooooooh's", he knew it was a monster "oooh hit".

Looking past the base jumpers, rock climbers, bmx riders, Iditarod mushers, and free divers, boxing is well represented with Mike Tyson, Muhammad Ali, and Archie Moore. Good selections all, but the true ironmen of the sport heralded the transition between the no holds barred London Prize Ring rules to the modern day gloved Marquess of Queensberry rules. Several title fights edged into the 40-50 round category, where a fight was won only by a knockout or another fighter quitting on the stool. It gives "toughest athlete" a whole new meaning. Lou Gehrig and Jackie Robinson are two old school baseball nominees, and they are really the only baseball players you could include in a toughest athlete list. Modern baseball players are out for several weeks with finger sprains or sore abs. Old baseball players did not even have abs they had guts, and they were fueled with beer and hot dogs. Jack Hamilton is another ball player included on account of a fastball he took square in the face. Waking up in an ambulance en route to the hospital after taking a baseball to the head is never a fun experience, trust me.

The NHL is also well represented, with Gordie Howe, Maurice Richard and Bob Probert earning nominations. Versus notes Howe's unique double edged talent as one of the league's best scorers and most feared competitors. One ref described the sound of his 1959 pummeling of Rangers goon Lou Fontinato, "Never in my life have I heard anything like it, like the sound of chopping wood. Thwack! Then all of a sudden Louie’s breathing out of his cheekbone." Take a second to wipe that image from your memory. The Rocket Maurice Richard, namesake of the league's goal scoring trophy, also was described knocking out a Ranger goon twice, once after he regained conciousness. Toughness to Versus appears to be flattening New York Rangers, can't argue with that.

Far and away the leading favorite from the NHL, and possibly a leading favorite out of the initial 32 nominees, is former Detroit Red Wing and Chicago Blackhawk enforcer Bob Probert. The Windsor, Ontario native's career resume is littered with the remnants of the NHL's most intimidating and feared players. Probert engaged in several of the NHL's most classic fights with the likes of Tie Domi, Georges Laraque, Marty McSorley, Donald Brashear, Stu Grimson, Joey Kocur and Dave Semenko to name a few. He flattened Colorado's 6-foot-5 240-pound Scott Parker on home ice. He pummeled the "Grim Reaper" Stu Grimson 6 seconds into the Anaheim Ducks first game to introduce a new generation of fans riding the wave of interest in the Mighty Ducks film series. In addition to his enforcer skillset, Probert was far from a liability when on the ice. He provided a physical edge that opened up room for skilled players, while contributing 163 goals and 384 points in 935 games played.

Probert also watches a lot of hockey and can only shake his head at how the game has changed. It's fast and exciting, but Probert thinks there are too few hits and too many penalties called. "Imagine a penalty call in overtime of the Stanley Cup. That was unheard of."

He also thinks the league still needs enforcers to protect their teammates. If he was playing, there'd be heck to pay for some of the cheap shots players are getting away with, Probert said. "I'd be out there fighting before those guys left the ice." 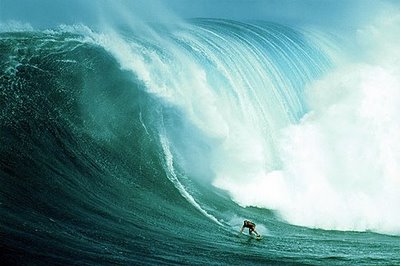 My dark horse pick for CamPain 08 is big wave surfer Laird Hamilton. Many only know of Hamilton from his AMEX commerical, his marriage to Gabrielle Reece, or some of his unusual expirimentations with kite boarding or paddle surfing. Hamilton is also one of the pioneers of modern big wave tow-in surfing. With many of the largest breaks traveling at speeds too fast for paddle in sufing, Hamilton has taken tow-in surfing to new levels and is widely regarded as the top big wave surfer in the world. On August 17, 2000 at the Teahupo'o Reef in Tahiti, Hamilton dropped into what many consider the world's thickest wave resulting in an iconic Surfer Magazine cover known around the world. Laird Hamilton has also surfed monster 50+ foot waves at the legendary Hawaiin break Pe'ahi (Jaws), which along with Half Moon Bay's Mavericks is considered one of the most dangerous surfing locations in the world.

It is one thing to engage in a 12 round title fight, to ride a bike over several mountain ranges or lineup against an NFL O-lineman for the better part of an afternoon. It is an entirely different thing to catch a wave the size of a 7-story or 8-story house moving at 30+ miles an hour, then trying to cut hard to avoid a mountain of whitewater that can make you a permanent part of the reef below. Auto racing talking head Jeremy Clarkson described Formula 1 racers as not having the part of the brain that registers fear when describing how modern race car drivers approach a difficult section of a course (such as the corkscrew at Laguna Seca). When a normal person would break, or fear for their life approaching a 300 foot elevation change and two quick turns at almost 200 mph, a race car driver does not.

Laird Hamilton has a similar brain abnormality. When riding waves the size of small office buildings, he genuinely looks like he is enjoying the moment. Other big wave surfers have said that Hamilton is capable of making adjustments on some of these gigantic waves that no other individual could. Each time he drops in on another wave he displays a "lifetime of determination, competition, domination and tradition" like no other athlete.

Make your selection for toughest athlete at Versus CamPain 2008 or make a write-in nomination here, or view the the original "campain ad" and listen to the debate here. Voting for Round 1 ends August 1st. No voting for yourself George Parros.

[Update] The Versus MMA youtube channel has this camPAIN08 video clip featuring several mixed martial arts athletes worthy of consideration. Rickson Gracie, Fedor Emelianenko, Dan Henderson, Randy Couture are not on the initial list of 32 Toughest Athlete nominees, but Sacramento's Urijah Faber is. Faber is the WEC's Featherweight Champion. What makes Faber worthy of consideration you say? This interview where he describes fighting off a large mob of Balinese criminals by himself. Why won't Faber win the Toughest Athlete title? Because he went to Davis. War Chico State!

[Update2] Trying to follow in Barbaro's footsteps, Bodacious has garnered .4% of the vote in the "Bull" category. For some reason I do not think there will be a new model of Lamborghini named after this entrant.

The 1,800lb horned beast was referred to as "The World's Most Dangerous Bull." His specialty was delivering life-threatening head butts to riders. After one unsuccessful ride, Tuff Hedeman's face needed reconstructive surgery. Later that year when Hedeman drew Bodacious again, he opted not to ride him.

World's Toughest Athlete, World's Most Dangerous Bull, that is just splitting hairs. Bodacious gets my vote. The last professional bull rider to try to ride Bodacious donned a hockey mask and had both of his eye sockets fractured. No one ever tried to ride him again. Bull 1, Pros 0.