What's the Deal With O'Sullivan?

Share All sharing options for: What's the Deal With O'Sullivan?

Everyone's freaking out because Patrick O'Sullivan hasn't yet signed. To recap: O'Sullivan had a break out of sorts last year, tallying 53 points in 82 games while also showing good hockey sense on the penalty kill. When you factor in just the time he was playing with Kopitar and Brown, he had 34 points in 40 games. Naturally, he's looking around at the league's situation and is seeing dollar signs. Why wouldn't he look at Jeff Carter's contract and think that seems about right for him? They're the same age, they had the exact same point totals this season, they both played on the penalty kill... they're kind of spitting images of one another. Of course, O'Sullivan doesn't have the track record Carter has and he hasn't shown what he can do in the playoffs, but the argument is there for his agent to exploit. The Kings, on the other hand, are hoping to sign O'Sullivan to a cheaper deal because they have to sign Kopitar and Johnson next year and others down the road. This all leads to an impasse that looks like it might take a while to resolve. 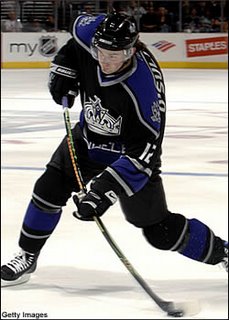 I think the hold-up doesn't necessarily involve O'Sullivan, but instead involves Anze Kopitar. We've heard his name in rumors recently and I think the reason isn't that he's getting traded, but that Lombardi is trying to get him locked down to a long-term deal. When you're dealing with restricted free agents, you want them to look at their value in relation to the team. If they're looking at their value in relation to other free agents, you're going to run into a problem. If the Kings can lock Kopitar down, they can then set the ceiling for every other free agent with whom they negotiate. A player isn't going to presume they're more important than Kopitar and will be less likely to demand more than him. Plus, signing Kopitar gives the team financial security and lets them know who the cornerstone is going to be in the future. 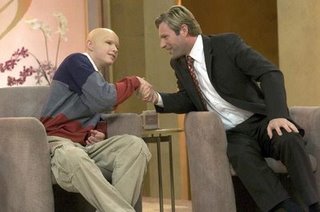 This is just some harebrained* theory of mine, so don't take it as gospel. I'm just saying that signing Kopitar first before their other restricted free agents makes a lot of sense and I wouldn't be surprised if Kopitar was pursuing it. Make O'Sullivan weigh his worth compared to Kopitar, not to other restricted free agents. Does this make sense or is the heat getting to me?


*I always thought it was "hairbrained," but then when I thought about it that didn't make sense. Like, they think with their hair? But then I thought even more about it, and "harebrained" seems stupid too. Are rabbits known for being stupid? They just kind of eat carrots and fuck all the time, and that seems pretty smart. I wish I could do that. I need to go lie down and think about this.