Well, I may finally be out of the hockey-photoshop-contest woods. There were three nearly-simultaneous blogger-led contests out there, and as an avid supporter of web nonsense, I've now participated in all three. Here's my previous efforts towards Bettman heroism (Puck Daddy) and Gretzky negativity (The Pensblog).

And now we get to Curtis Sanford's mask, which is actually an official Canucks-sponsored contest, but has also received a side-push by Dr. Mirtle. Before we take a look at my offerings, I should note two things: (a) I'm not submitting any of these into the official contest, but if anyone feels like stealing, I won't protest. (b) As such, I've slacked a bit on production value here: I created a transparent mask template and mostly overlayed it on images. Most of these could use a touch-up.

Still, I'm not that upset with the outcomes. Let's take a tour, shall we?: 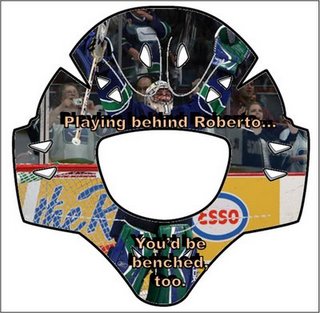 Why not show off the reason why this helmet won't get any airtime?

Well, I'm not sure how well Sanford would enjoy wearing a Luongo-themed helmet, but at least it offers him an easy comeback: "You'd be benched, too!" I don't know if it's that clever, but hey, it's honest. 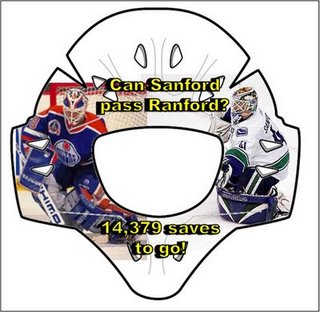 The final version of this will feature a chalkboard so the save-differential can be updated.

Ah, yes. Ranford vs. Sanford. I picked saves as a category only because it offered a comically high number that could be updated throughout a Sanford-played game. Plus it offers a nice humble look at Sanford's paltry place in the history of goaltending. 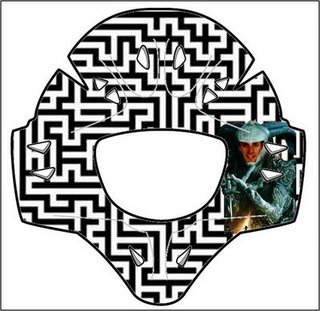 Can you navigate your way to this guy's five-hole?

You know, it's kind of difficult coming up with good puns for the name "Sanford", given that I always avoid the most obvious choices (Sanford & Son, Stanford University). This pun is way half-assed, but perhaps the maze design can help confuse shooters. Also confusing? When Sanford gives you a root baby to help with your mother's childbirthing.

Submission #4: The Helmet About Nothing

On the other hand, I do really like this pun, but the design could have had a little more time put into it. I think this helmet should also have a little computer chip built into it, and whenever anything hits Sanford's mask, it could play the bass guitar Seinfeld theme. Whatever the design, I will say this: a bald Demitra makes for a fabulous Costanza.

For these last two designs, I have to give inspirational credit to fellow BoCer Mike Chen, who threw me a few bones on my quest for Sanford silliness:

Submission #5: Things Could Be Worse 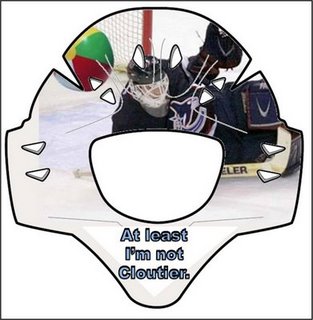 "At least I'm not Cloutier." That really should be a positive mantra for all of us, and I think the message would resonate strongly with a memory-haunted Vancouver fanbase. 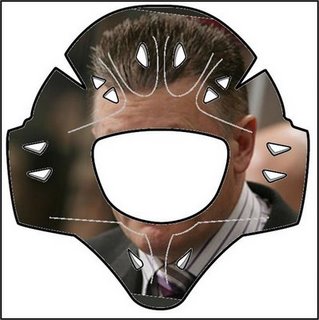 This is just a prototype. The actual version would involve real hair.

And finally, another call-back to Vancouver's not-too-distant past. The Crawford Hair Helmet could allow the gelled-up hair-monster be a fixture on the Canucks bench once again. Of course, there'd probably be some debate about how much hair could be used; I'm quite sure the zero-fashion-sense competition committee would try to set some limits.

So there you have it. Six offerings with a wide range of brilliance, all that have roughly zero chance of making it to the big leagues (not unlike Sanford's chances of being a regular starter for Vancouver). Like 'em? Hate 'em? I don't care; at least I'm done with obligatory photoshops.