Dominant as an east-coast twentysomething

Share All sharing options for: Dominant as an east-coast twentysomething

Well, I'm about half-way moved into my Irvine place, and I figured I could take a quick break from the packing/unpacking madness to resume my normal blogginess, specifically as it relates to Teemu Selanne, Power Play Specialist. The Finnish Flash may or may not have declared that he is returning to Southern California in September, depending how much you trust your Finnish.

I made a quick table below that attempts to answer one question: Despite Selanne taking most of last season off, how many NHLers have scored more regular-season power play goals than Teemu since the lockout?

Top PPG Scorers since the Lockout
(reg. season only) 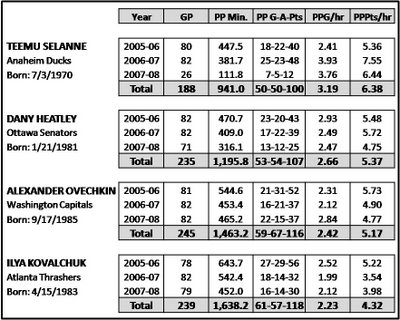 Answer: Three, and it's worth looking at some of the commonalities about them.

1. They all are more than a decade younger than Selanne. Really, these three players probably represent the new wave of goal scorers, and Heatley, Ovechkin, and Kovalchuk could be taking home the Rocket Richard Trophy for a long while.

3. They all played significantly more power play minutes than Teemu. This is really the stat that got me: not only are these comparables way younger and in the easier conference, but look how their power play total ice time compares with Old Man Selanne. Unreal. Teemu is a PP freak!

Now I don't really want to knock any of Heatley, Ovechkin, or Kovalchuk (also: Tomas Vanek and Evgeni Malkin were both on pace to make this list over just the last two seasons -- they also are a decade younger than Selanne and play in the east): these names will be carrying the goal-scoring title for a long while. I also should stress that while I am comparing individual production numbers, PP success is very unit-based.

No, I'm just here to point out again how freaking remarkable Teemu's man-advantage production has been since his return to SoCal. While seemingly power play goals is a stat that has been dominated by eastern-conference children of the 80s, at least one representative of the old-school-west is still hanging at the top of the charts, making us marvel again and again in Anaheim.