Share All sharing options for: Flashback Part 2: Sleek digs up an Omen

(This is Part 2 of my "things I found when packing up for a move" series. Part 1 is here.)

You know, my life isn't all about going to Ducks games and then drawing cartoons about them. On occasion, I've even been known to attend a Kings game every now and again. It's sort of a fun outing, as I don't have to worry about any real rooting interest, and hey, it's something I can't see on Versus (Zing!).

In my moving frenzy, I found this 8 1/2 x 11 handout from one such game that Hockey Reference.com has helped me timestamp: October 16, 2001. And guess who was the Kings' coverboy for the handout--doesn't he just look swell? 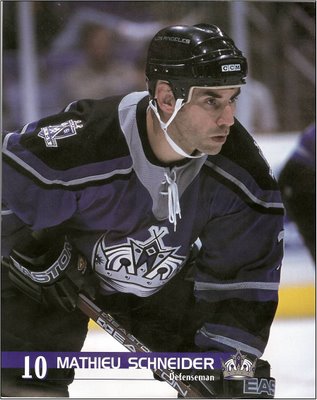 It's not Reebok wind-resistant, but not a bad look!

It seems a bit odd that this game memento would sit in the depths of my closet from 2001 until a week ago. I think this has to mean something other than "clean your closet more, you idiot". It's a sign, fate's version of an e1, and another bit of momentum for the BoC Collaboration.

Just for nostalgic fun, here's a look at some old-timey rosters printed on the back: 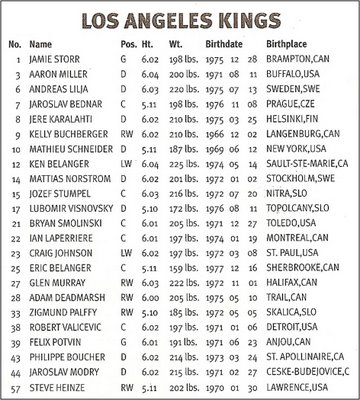 Current Kings: zero.
They should have kept that Heinze #57 gag running longer. 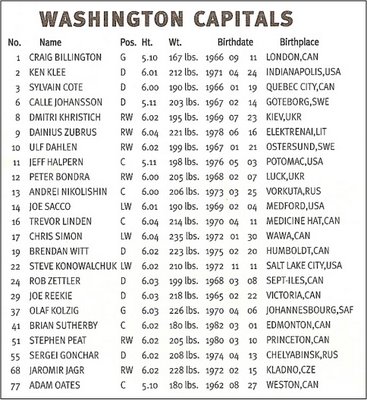 I can't help thinking it would really facilitate a trade if Schneider had an old teammate to reunite with in L.A.

Does anybody have Modry's phone number?