In Celebration of an Old Lesbian

Share All sharing options for: In Celebration of an Old Lesbian 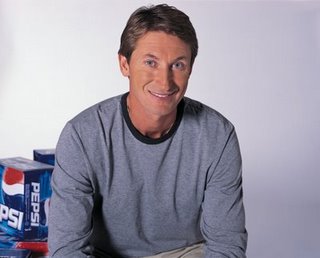 "So I was watching Ellen the other day and..."


Wayne Gretzky is not a physically imposing specimen. He basically looks like an old lesbian, someone who'd teach a cooking class at the local community center. I always have trouble explaining to friends just why Wayne was better than Michael Jordan, because they can see why Michael Jordan is great. They get why jumping 10 feet and unleashing a thunderous slam dunk is cool; explaining why a no-look pass through 3 defenseman for an easy tap-in is cool is harder. I think the best explanation you can give is to imagine John Stockton, and then imagine if he averaged 40 points a game for the first 10 years of his career. 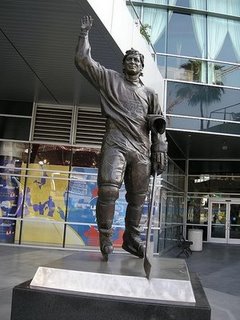 I'm not sure this whole trade anniversary is as big a deal to me as it is to some; if anything, it's more important to Phoenix and Nashville fans than it is to me. But still, it provides an opportunity to think back and realize how great Wayne Gretzky really was. My favorite memory of Wayne will always be that game 7 against Toronto, when he stood before the collective will of all of Canada and gave them the finger. That's the only moment where I think he let that hatred that drives all great athletes actually show. Don't let Star Wars fool you: the best motivation people can have is hate. All great athletes excel at being able to create that hate when necessary, whether it's from a throwaway comment by a lesser opponent or a flppant comment on a message board. They take that comment and let it consume them until their sole goal is to punish that person for having the temerity to challenge. The greatest moments, however, come from when that hate doesn't need to be created because it's already there. Gretzky was good at hiding it, unlike someone like Tiger Woods, but I know he desperately wanted to shut up the people who were saying he had lost a step, or that Doug Gilmour was better than him, even the people that had accused him of betraying his Canadian-ness by defecting to Los Angeles. And he did. He scored a hat trick in that game and dashed hopes of an all-Canadian final. He did for the same reason he married a model, and scored 92 goals in one season, or made ice hockey a popular sport in Los Angeles, California. He did because he's Wayne Gretzky.