Jay McKee? or: How I Look Up Random Players

Share All sharing options for: Jay McKee? or: How I Look Up Random Players

The Kings have been rumored for a lot of random defensemen this off-season and now it's Jay McKee's turn. When I first heard McKee's name I thought, "I wonder what it would taste like if I took a bite of a pizza roll and a corn dog at the same time." Then I thought, "Wait, who's Jay McKee again?" The name was familiar and I was pretty sure he was on the Blues, but I wasn't positive. If you're like me, you're horrible at scouting other players when they're playing the Kings because you're too busy yelling, "Goddammit, why is Ivanans playing with Kopitar?!?!?" In these situations, I have a quick and easy routine that I do to get an overview of a player. It's not meant to be comprehensive or definitive; it's just a quick look to see the player's value to his team. I'll share this with you, but you have to promise you'll pretend I have great abs every time you read my stuff. 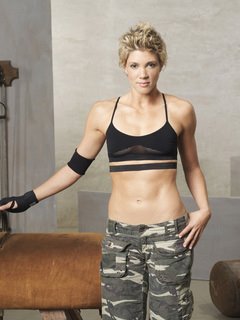 
1) Wikipedia! I like Wikipedia as a starting point because it gives you a brief overview of a guy's career and if he's gotten a DUI or been arrested for beating his wife or anything like that. Plus, you can check out his career stats and check to see if the guy scores a lot, has been injured, takes a lot of penalties, etc.

What I learned: McKee is a noted shot blocker in the league and he gets hurt all the time. He played for Buffalo for a while (now I remember!) and then he signed a 4 year deal at $4 million dollars a year with St. Louis. His first season he only played 22 games due to a knee injury, a broken finger, and 2 lower body injuries. (Jesus.) Last season he played 66 games. Given his contract and his injuries, I can probably assume that St. Louis isn't too happy with McKee and might be willing to move him for fairly cheap. He doesn't score a lot so I assume he plays a more defensive role.

2) Youtube! I like going to Youtube because it gives me a chance to see the guy play, if only for a little bit. Is the guy a big hitter, does he have a particularly nice goal, etc.

What I learned: McKee got lit the fuck up:

(The best part about that hit is that Baby Arm had to turn sharply and only took one step before he hit McKee, and he still knocked him into the bench. Wait, no, the best part is that McKee tried to get back on the ice to get back at Brown but the guys on the bench were just like, "Dude, let it go, you got rocked." Yeah, that's the best part.)

3) Time on Ice! I like looking at Time on Ice because it lets me see both how often a guy is playing and in what role. It lets you know which defensemen the coach counts on in what situations and how often the guy takes even-strength time. It's important to know that it doesn't tell you how good the guy is in his role, just what his role is.

(Hey, is there anyway to find ToI broken down by period? I'd like to see who gets ice time in the last five minutes, stuff like that.)

What I Learned: Jay McKee basically tied with Erik Johnson as the Blues' 3rd defenseman last year. McKee was 5th in total ice time amongst Blues' defensemen because he can't play on the power play, but he was 3rd in ice time at even strength and on the penalty kill. However, he was 3rd by a fairly healthy margin behind Eric Brewer and Barret Jackman. 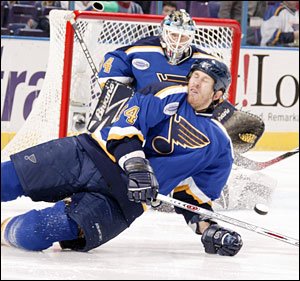 The ol' "Distract the shooter with a stupid face" technique


So, in 3 steps I've learned that McKee is basically Aaron Miller from a couple of years ago. If he were on the Kings, he'd play on a stopper line with either Jack Johnson or Matt Greene and play on the 1st penalty kill unit. The Blues weren't a good defensive team last year and were breaking in a lot of defensemen, so McKee probably got more time than he deserved just because he wasn't going to kill you with a mistake. This doesn't bother me too much, though, because the Kings were worse defensively and will be breaking in a lot of defensemen this year. McKee could play the exact same role on the Kings this season.

I don't think the Kings have anything the Blues would want (although I think Andy Murray would trade Erik Johnson to get Derek Armstrong back), and if the Kings are going to trade for someone I'd rather it be Mathieu Schneider or someone else who's, you know, good. Still, this was worth it just to know a little bit more about McKee for the next time the Blues are in town. This took me 5 minutes and I know more about hockey. What else am I going to do, my job?

Of course, Earl will tell you to just look at that one crazy stat he looks at and save your time, but I don't know how to use that and I'm stupid so I can't understand it. Besides, this is more fun.