Moments in Archaeology: Sleek digs up a Relic

Share All sharing options for: Moments in Archaeology: Sleek digs up a Relic

In the process of moving, I’ve had a chance to go through some of my old piles of junk, and as is usually the case in such undertakings, I have uncovered some real gems from the kid who would grow up to become Earl Sleek. Back before I had an internet alias or a blog to write on, I was still an emerging hockey nerd with a creative streak. Exhibit #1: 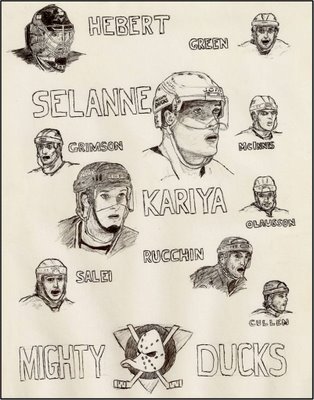 It's actually an impressive piece of work, something I'm not sure I'd have the patience to sit down and attempt these days. Also noteworthy: this had to be pretty soon after I became a hockey fan at all. Anyway, I got a real nostalgic kick out of finding this relic from my fan-girl past, and I figured long-time Ducks fans might enjoy it as well. I've got a few more deep-closet relics to share next week as well, but I think this one is the oldest and most impressive.

Just to keep this post interactive: Which non-Finnish player featured in this picture would fit best on the current Ducks roster? For this exercise, I am talking about the 1999 version of the player, not whatever washed-up version we'd see today.