As I noted a week ago, it's hockey photoshop contest season, and today I'll show what I've done for the Pensblog's anti-Wayne movement. If you recall, their challenge was easy enough: "The task is simple, make photoshops that depict Wayne Gretzky in a negative way or just make fun of him."

Well, just like before when I had trouble making Gary Bettman look heroic, I'm similarly challenged in bringing out Wayne's negative side. So as usual, I just ignored the stated challenge and went back to what I'm good at: lame-ass puns. Let's take a look, shall we? 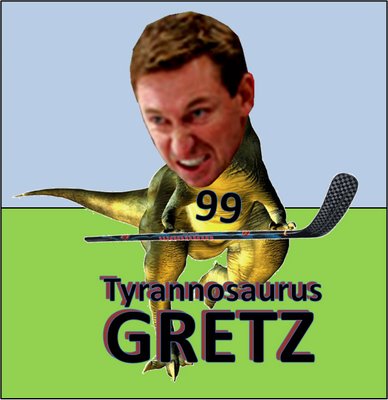 So I don't know if this is truly negative, though it does show off a bit of an angry side for Gretzky, and historically the T-Rex was pretty bad at avoiding extinction. It was actually kind of difficult to find pictures of "Angry Wayne" to put on this dinosaur's body. Strangely, the only angry shots I could find featured Gretzky the head coach. Ha ha, I wonder why. 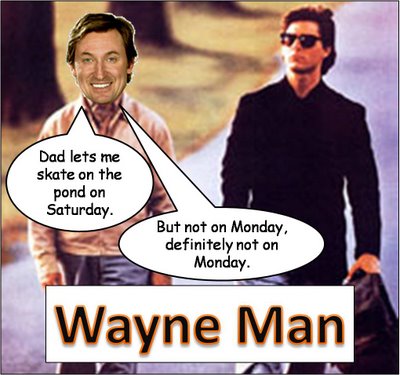 Quite talented and yet quite inept.

OK, this might get a little more "on theme", though Rain Man has as many positive qualities as he does negative. Still, I think there's some parallels with Gretzky -- a sheltered upbringing, a superhuman talent, and a questionable grasp of reality. I don't know how well Brent Gretzky was able to exploit his brother's talents, though. 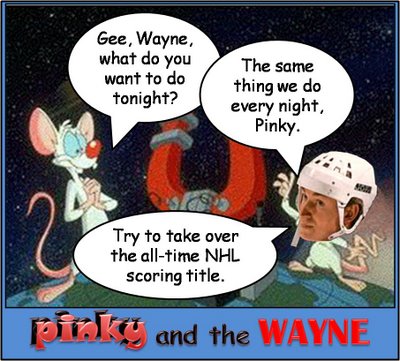 This one's sort of appealing to me: it's got a negative spin, a villainous overtone, and a built-in dose of hilarity. I like this pun-parallel, except for the fact that Wayne was successful in his takeover attempt (while the Brain is regularly frustrated in his).

So, what did I miss? Anybody have any good Gretzky puns they want to see made? My next project (barring any Ducks news) will be the ol' Sanford mask. Trust me, though, I'm betting it will be lame like Wayne.