The time I nearly stumped the internet

Share All sharing options for: The time I nearly stumped the internet

Two weeks ago, I was working on a piece to anger Red Wings fans, and I wanted to research and write up ten playoff performances. However, I ran into a problem: I couldn't figure out how many points Scott Niedermayer had scored in the 1995 Cup Finals. This wasn't super-critical to the piece, but I was planning on breaking down ten playoff performances, and it seemed like an answerable question with the wide resources of the internet, right? Well, barely.

Sure it's easy enough to find out what Scotty scored in the entire 1995 playoffs, and the scores of those Finals games, and even a game-by-game re-telling. But I searched and I searched and I found nothing that could resolve what seems like a very answerable question.

Frustrated with fruitless web searches, I then turned to some of the biggest hockey minds around the blogosphere: notably die-hard Devils dude Wyshynski and the guys from Fanhouse -- McErlain, Mirtle, Gőlbez, Ciskie, J.P., etc., and the best I got from that group of hockey know-it-alls was either "Wait a day -- I'll check my hockey yearbook tonight" or "Why not write a nice-sounding letter to the league?"

I had nearly given up in the disbelief that a seemingly an easy answer was nowhere to be found on the web, when finally deep in a set of search engine results I was directed to The Professional Hockey Server: Hawaii's NHL Page, which is apparently hosted at the University of Hawaii in Hilo. 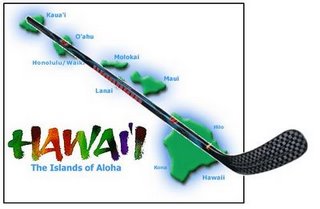 Fear not, mainlander. Hawaii has your answers.

So after a few more clicks, the answer I sought was found here, in a day-by-day scoresheet breakdown of the '95 playoffs, with the four games I cared about being the last four on the page. Question answered. Scott scored 1 goal and 3 assists in the '95 cup finals. Hawaii 1, Mainland 0.

And while that was helpful, it raised a whole new question: Why the hell is the only internet source for 1995 game logs maintained on the Hubble server of the University of Hawaii? According to the FAQ, it all appears to be the doing of one Richard A. Crowe, Ph.D., who was quite the busy fellow while compiling NHL stats in the late 90s:

"There are other things in life besides maintaining hockey statistics. In fact, I am an extremely busy individual. I teach physics and astronomy classes 6 hours a week, maintain a research program on spectroscopy and photometry of variable stars, manage a large education/research grant, sit on a division personnel committee as well as an outreach committee, serve as a member of the Board of Directors of a local networking organization, play clarinet in the Hawaii County Band 30 hours a month, regularly sing in the UH Hilo Chorus as well as practice piano, and support a young family of four."

Here's a peek at his process, back in the day:

"The scoring data is entered at the keyboard using a Fortran program (SCORESTATS) and then I run another Fortran program (BATSEARCH) which checks for consistency with the information available in the newspaper box scores. SCORESTATS simply puts in the number of games played by the respective teams rather than for individual players. BATSEARCH takes 180 minutes to execute, but when it is completed, both regscore03.html and scorerstat03.html are updated and list GP for individual players, not teams. The latter file will then also include Shots, Game-Winning Goals, and +/- statistics for individual players. The updated files should usually be available after 7:00 a.m. Hawaii Standard Time."

Sounds rigorous. At any rate, the point of this post is twofold:

1) To point out another resource on the internet for those interested in looking at basic boxscore stats going back in time. For the record, here's my list of resources: 2) There's an overriding theme at BoC about die-hard hockey fans emerging from non-traditional markets, but I don't even know if we're in the same ballpark of out-of-market fanticism as Dr. Crowe. Does anybody know the story of this guy? I'd love to hear it. Displaced Canadian? Spontaneous Hawaiian puckhead?

At any rate, I wasn't on the search for hockey stats back in 1995, but I certainly am grateful for this guy's decade-old effort nowadays. Congratulations, Dr. Crowe. In an era of an expanding NHL and an emerging internet, apparently the leader of real-time hockey statistics resided in the hockeyless paradise of Hawaii.

Take that, mainland traditionalists of the 90s (you know who you were)!