Share All sharing options for: 'Tis the season for hockey photoshop contests

Wow. Well in the wake of Puck Daddy's wildly successful Gary Bettman Photoshop Contest (230 submissions, not even counting my own), I guess art contests have become the blogger rage to help cope with the dead days of August. Of course, as a hockey-photoshop fiend myself, I wholly endorse all creative endeavors in this field, so I'm here to highlight both of the current contests before even starting on my own entries.

Contest #1: The guy with the most free time in the NHL is seeking your help to design his goalie mask. 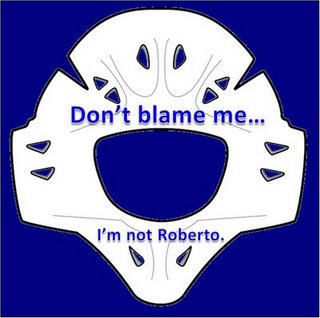 King of bloggers James Mirtle has this one covered, but Curtis Sanford, the Canucks' backup to Roberto Luongo, is having a team-sponsored contest for fans to design his mask. To put it in Ducks terms, Sanford is the modern-day version of Danny Sabourin, the guy who occasionally gets called in when Luongo has to take an overtime shit in a playoff elimination game.

The winner of the actual Canucks contest stands to have his art featured up to six times this season, but if you're clever enough, you might even get featured on Mirtle's site, which may represent more eyeballs. Or if you have no skills but want to suggest an idea, I'm certainly not above stealing. Or whatever, if you feel like doing a Duck, King, Shark, or Star design, we'll show 'em here.

Follow the Mirtle link above to find the mask template. Deadline is August 25th.

Contest #2: It's about time the best player in the history of hockey got taken down a notch, right?

If Mirtle's the King, these guys are the Joker. The Pensblog, sick and tired of all the Great One's infallability, have put together a simple challenge: "The task is simple, make photoshops that depict Wayne Gretzky in a negative way or just make fun of him."

And why not? If there's 230 heroic aspects of Gary Bettman, there's surely a million negative facets to Wayne Gretzky. There's no template required for this one, so have fun with that one, if you're photoshop-inclined. I'll warn you, though -- the photoshoppers reading The Pensblog are a sharp and talented bunch -- if you think you won't measure up, send 'em our way and we'll show 'em here too. Deadline is August 24th.

So now that I've promoted these contests, check back in nearer to the deadlines and I'll put together my "brains" and my "talent" and we'll see what emerges. Perhaps I'll get rushed and draw a combination-entry hockey helmet featuring the old lesbian telling Pronger's wife to get the fuck out of Edmonton. Or perhaps I'll just do a series of Gretzky movie posters.