Share All sharing options for: Anaheim's All-Time Team: Who centers the top line? 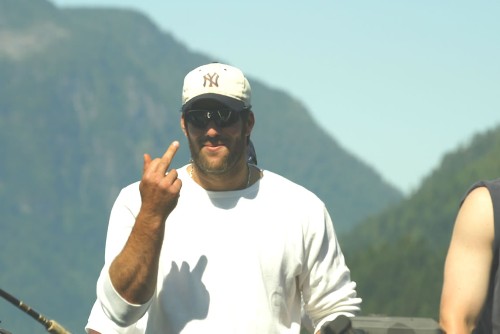 Well, before I get started on this All-Time Team challenge, I should first point out that the Chief at A2Y has written up his Rival Rating for the Ducks ("the Fowl"), and brings up a lot of the same reasons that I listed in my pre-sponse post, plus some new ones (the summer snatchings of Fedorov, Schneider, and Bertuzzi). There's actually some glowing references to our cumulative effort here at BoC, so here's to classily hatin' ya, Red Wings.

No real reason for the Bertuzzi picture, I suppose, other than it's an image I hadn't used yet and now seemingly my window for paparatuzzi is suddenly over. Still, this mc79 post is gold; see ya in hell, Bert.

A sidenote about this BoC challenge (see Rudy's All-Time Kings and Chen's All-Time Sharks): We're not huge planners or schemers here at BoC, and it's very rare that a themed-set-of-posts idea moves from the "we should all do this" phase to reality, so this is pretty cool. Even so, in the summer Sleek tradition, I'm going to not quite follow instructions. 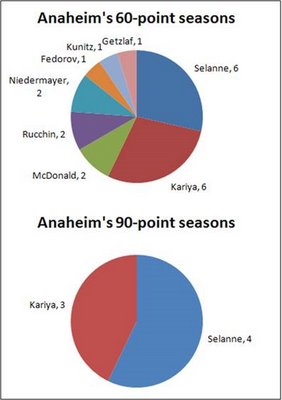 That is to say, instead of me just telling you my all-time team, I'm going to open one slot up for debate. Because really, that's what this Anaheim exercise boils down to. Top line wingers isn't much of a debate (see chart to the right), and in terms of top defensemen and a #1 goalie, the Ducks are at their peak right now -- they've never previously had the talents of a Niedermayer, Pronger, or Giguere.

But who is the #1 center for the Anaheim Sometimes-Mighty Ducks of Anaheim (what else would you call this mythical all-time team?)? That and a few more items I think are worth separate posts before I fully endorse a Sleek roster, so here goes. Before I list out the candidates, though, I guess I should lay out some ground rules, or at least what I think are some considerations for "All-Timey-ness":

1. Think about the player at their Anaheim peak -- things not to consider: Adam Oates as a Boston Bruin, Andy McDonald's career without Teemu Selanne, or Ryan Getzlaf's future potential. This all should be based on games already played in an Anaheim uniform.

2. That said, longevity and consistency are pretty useful -- players should provide some identity as an Anaheim fan favorite.

3. Just to confuse things a bit more, also consider how well the top-line center would fit with wingers Kariya and Selanne; as we don't want our team outscored by the Sharks' imaginary squad.

So here's five candidate centers, in somewhat chronological order. Be warned, I suspect I only have room for four of these guys on my final roster, so in addition to telling me who should center the top line, I'm also looking for who should be cut from the team entirely. If you're feeling generous, you can even rank all five.

Roochie is the guy who represents steadiness and longevity on this list. Counting against him, though, he may be the least talented individual of the bunch. Still, I could be happy with Rucchin on the top line; for years Ducks fans heard about how some new person was finally going to take the top-line center position from Rucchin (who was a bit slow to keep up with Kariya and Selanne), but every time Rucchin held his spot. Rucchin did lead the 2003 Ducks in playoff goals.

Old man Oates only came to Anaheim for one season towards the end of his career, and was a top-line mainstay between Kariya and Sykora during the 2003 cup run, where he co-led the team in scoring. Oates was a wizard with the puck, floating aerial passes that make goal-scorers salivate. He was stunningly quick at times, also, to the point where "Old Man Oates" became a tongue-in-cheek nickname. Oates never played with Selanne, so we can only conjecture there, but I suspect his puck-dishing would blend in well with the Finn's finish. As a bonus, Oates probably beats out this group in the category of "player I most enjoyed watching play".

Fedorov isn't a guy who Ducks fans are particularly enamored with, but there's little question to his talent. Also, I'd argue that Sergei represents Anaheim's first ever summer blockbuster signing -- a superstar in their prime choosing to come to SoCal. Sergei never played with Kariya and only got five post-lockout games with Selanne, but he did become the first player not named Kariya or Selanne to lead the Ducks in scoring since the inaugural season. Fedorov's quick, puck-smart, and a vicious backchecker; despite never seeing an Anaheim postseason, could he be the best fit on the top line?

Andy Mac played seven seasons for Anaheim, but really only two are worth talking about: the two post-lockout seasons he spent with Selanne on his wing. Aside from those two years, McDonald's career has been fairly pedestrian. Still, as this is an exercise about peaks and playing with superstar wingers, Andy Mac could be a front-runner. His 85-point season is the top performance for any of the Anaheim centers, and he did lead the 2007 squad in playoff goals. Andy Mac's downfall has been consistency, or at least the ability to produce without superstar wingers, but should that affect his place on Anaheim's All-Time Team?

Getzlaf almost by default should take this position in the next couple of years, but is he all-time-top-line-ready now? Getzlaf earned the 1st line center role in his third year this past season, and was stellar, leading the team in scoring while facing opponents' top defenders. Other than the power play, Getzlaf hasn't shared that much ice time with Selanne in his Anaheim tenure, though, as he's fulfilling an on-ice marriage with Corey Perry. Perry, by the way, is not making my all-time squad, if that matters in the Getzlaf ranking. 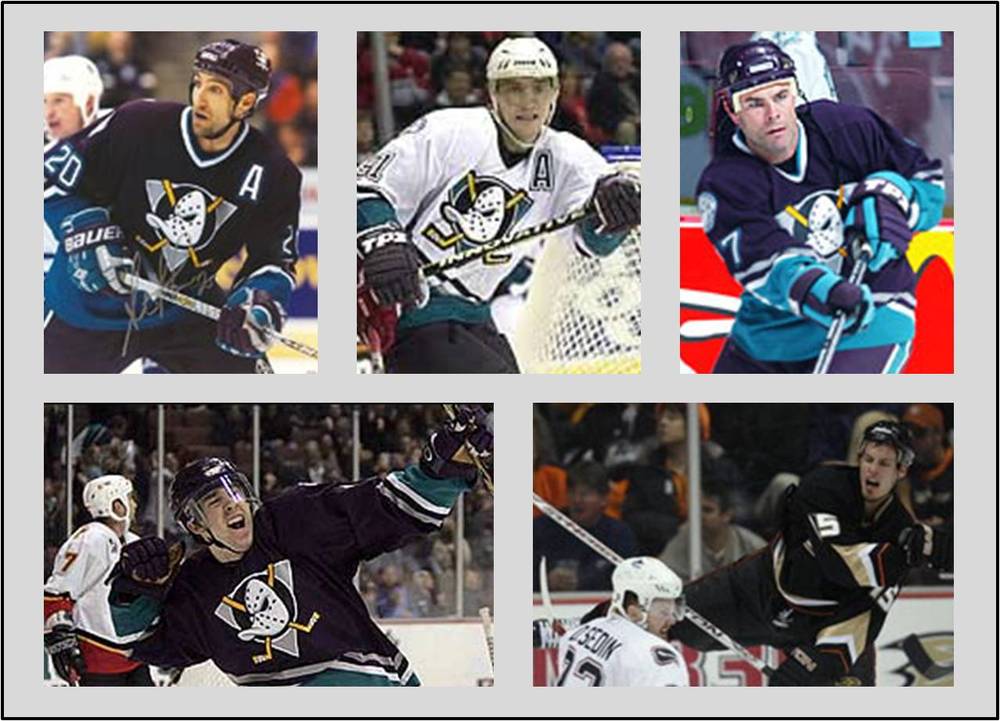 Who shall center the #1 line?


So there you have it. Five centers who have spent at least one season in Anaheim and are competing for a coveted Kariya-Selanne center position for these Anaheim Sometimes-Mighty Ducks of Anaheim. Who gets the #1 spot? Who gets cut from the team completely? I'll take your rankings and justifications in the comments.