The Case for Patrick O'Sullivan

Share All sharing options for: The Case for Patrick O'Sullivan 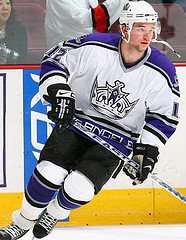 -O'Sullivan came up through Juniors and the AHL as a skilled, sniping forward who could potentially step into a top line role. The Kings instead started O'Sullivan on the 3rd line to help teach him both defensive play and a little humility. O'Sullivan responded beautifully, turning himself into a tenacious defender while still keeping his scoring touch. That's the kind of player you want to keep around no matter what.

-O'Sullivan was the 2nd most likely forward to be out on the ice when the Kings were a man down (behind Michal Handzus) and was the only bright point on an otherwise abysmal Kings' penalty kill. O'Sullivan had 3 short-handed goals last season without compromising his zone coverage. 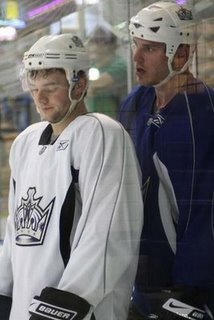 -Do you ever wonder what Labarbera's insides look like?.
-What? No.
-...Me neither.


-O'Sullivan played the most special teams of any forward on the Kings. He was the Rob Blake of forwards, averaging over 2 minutes a game on both the power play and the penalty kill. On the power play O'Sullivan seemed a little uncomfortable integrating himself with everyone else on Kopitar's unit after Cammy got hurt, but that could be the result of little practice time. When Cammy came back O'Sullivan moved to play with Frolov and seemed much more comfortable since he was used in a shooting role.

-You're going to hear (from me) that O'Sullivan doesn't deserve much money because he's really only had one season in the NHL, but whose fault is that? O'Sullivan scored 19 points in 44 games as a 20 year-old; if the Kings had kept him up all season instead of sending him down so they could play Brian Willsie more, he would have had a 40-point season. O'Sullivan took his demotion like a man and killed in the AHL while he was there, then came up the next season and played excellently. O'Sullivan sacrificied personal gain to help the Kings get better; now the Kings need to pay him for that.

Overall, Patrick O'Sullivan is a very good two-way forward and is only 22. I think a good comparable for what Patrick O'Sullivan might become is Jason Pominville, a point-a-game player that plays on both special teams units. O'Sullivan was raised by an abusive, over-possessive father and has battled that to become one of the better young players you're going to see in this game. The only reason he hasn't show more is because the Kings haven't allowed him to do so; pay him what he'll be worth and let him show you that it was a good investment.

Non-hockey update: It's Saturday and this was boring so here's Norm MacDonald's roast of Bob Saget for you to enjoy. I love Norm.