The Chances of Oscar Moller and Wayne Simmonds

Share All sharing options for: The Chances of Oscar Moller and Wayne Simmonds

One interesting aspect of this whole Patrick O'Sullivan holdout thing is that it opens up one more spot on the roster for a little while. If O'Sullivan were to wait another couple weeks to sign, he'd probably miss the first few games while he got in game shape. In the meantime, prospects Oscar Moller and Wayne Simmonds have impressed in training camp, leading some to wonder if they can earn a spot. In reality, it was extremely unlikely they were going to beat out someone like Ted Purcell or Kyle Calder, but with O'Sullivan gone they may have a chance to stay up and get in a few games. 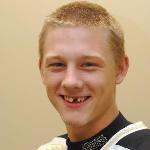 You need to clear that puck or we'll all gonna die!


Oscar Moller is the more skilled of the two and has more hockey sense; though small, Moller is pretty tenacious and works well in the corners. Also, he looks like Captain America from Generation Kill. Last night Moller scored a goal and 2 assists in only 12 minutes of action. The problem with Moller is that he's a little small and probably couldn't hang for a full NHL season quite yet, but the Kings may decide to keep him up for the 10-game limit before sending him back to Chilliwack of the WHL. 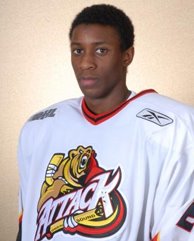 
Wayne Simmonds, on the other hand, is what my roommate in college would call a CAB (Cool Ass Brother).* Simmonds probably doesn't have the hockey sense to hang in the NHL, but he does not quit and would definitely make an impact for the Kings. Plus, the crowd would fall in love with him in about .4 seconds because he's cool and I'm already in love with him because he looks like the main guy from Cool Runnings. (In my head he's starring in a real life sequel.) He had a goal, a fight, and a game misconduct last night in Kansas City. Simmonds will be headed to Manchester this season to work on his defense and to get bigger, but he could end up staying if the Kings replace O'Sullivan's minutes with a current roster player. I have to admit, I really want to give Simmonds a shot because I think he has earned it.

*I'd stumble over my words and then whisper that he's African-Canadian.

What's that old saying, when someone closes a door they open a window? That doesn't make sense, because why would you close a door and then immediately open a window and what if you have a cat, but it works for the Kings' purposes. The Kings seem to have gotten lucky with Moller and Simmonds and they could use O'Sullivan's holdout as an opportunity to reward them for their hard work.