Chris Pronger has a BLOG?!

Share All sharing options for: Chris Pronger has a BLOG?! 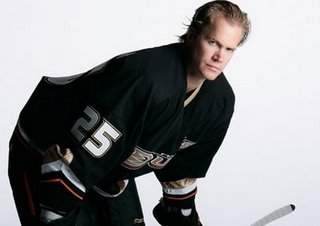 Blogging? That's easy. Keeping the elbows down? Not so much.

I feel almost guilty bringing this up, as certainly I'm doing more harm than good, but I suppose that's in my nature (my NHL 09 Iowa Chops coach says I'm a lousy team player). Finny, the Girl With the Puck, gave a nice recap of Saturday's training camp activities for the Ducks, but nearly lost in all that Teemu-love was the casual dropping of the fact that our own Captain Elbows has taken to the keyboard on his own site, chrispronger.com.

I've added the link to Pronger's personal blog in the sidebar, and frankly it's not all bad material. Take for example his post talking about the NHL draft:

As we have seen over the years the teams that have the staying power in the top tier of the league are those that draft well and are continually restocking and shaping there teams with an eye on winning in the short term but never losing sight of the long term and how and where they are going to find there future stars.

It's a lengthy sentence, sure, but it's not a horrible post. I think it offers at least some sincere thoughts on Pronger's view of team-building, and his ideas are rational on a broad sense at least. Pronger has also written a bit on his training camp start, and it certainly offers a perspective I'll never have (you know, the perspective of a guy who pays attention to training camp).

Now before all you Pronger-bashers go pester the poor guy, I will point out two things that impressed me about the site. One, he does have decent-name guest bloggers: Andy Strickland, Dan Murphy, and Mike Brophy have contributed thus far. Even more impressive to me, though, is that Pronger put a page up endorsing Finny's Run for the Cure campaign. That's borderline classy, Pronger.

I think we're all impressed at your ability to type coherently, big guy. Good work, but I'll tell you this. You are one hated dude. There's fans of Detroit, Edmonton, San Jose, and Ottawa that are perfectly good typists too. I'd offer you some blogging tips, but unfortunately it's too late for you to use tip #1 (post under a fake name), so good luck, Pronger. And keep kicking ass on the ice.