Does Patrick O'Sullivan Have Any Leverage?

Share All sharing options for: Does Patrick O'Sullivan Have Any Leverage?

I know, I know, I promised I wouldn't talk about this, but David Blaine promised he would fall to his death and look what happened with that.

Can someone explain to me what Patrick O'Sullivan is doing? I admit that I'm kind of dumb (I listen to Andrew WK), but I don't really see where he has any sort of leverage in this contract holdout, stayaway, whatever you want to call it. To me, there are three ways a restricted free agent can affect his negotiations: arbitration, offer sheet, and missing time. O'Sullivan isn't eligible for arbitration, no one bit on an offer sheet, and the Kings are already missing the playoffs this season so it doesn't matter if he's there or not. There's no incentive for the Kings to give in at all. 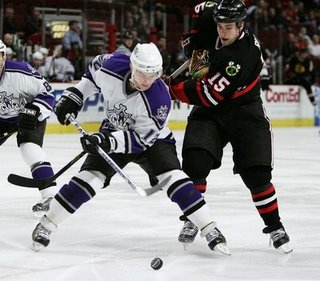 Where does that leave O'Sullivan? Lombardi won't give a one-year deal because he doesn't care about this year. The LA Times is reporting Lombardi won't give into anything shorter than a three-year deal, by which time guys like Oscar Moller and Ted Purcell or firmly entrenched on the NHL roster and can replace O'Sullivan if necessary. I think O'Sullivan's agent was hoping to force the Kings into a Jeff Carter-type deal, but the reality is he won't get anything more than a Andrei Kotsitsyn deal. He can either take it or hold out all year. That's basically it.

Colten Teubert was returned to his Junior team yesterday, a move that was expected by some... okay, me. I expected it. Teubert's game is reliant upon strength and there was just no way he could hang with grown men at this point in time. He'll head to Junior and hopefully improve his defensive positioning and offensive game. I'd say we have 2 years until we see Teubert in the NHL.