Share All sharing options for: Ducks put Schneidermayer on Waivers 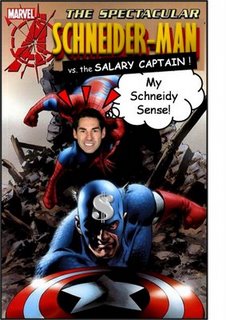 Well, so much for the BoC Collaboration. Instead of waiting any longer for a trade partner, it appears that Mathieu Schneider is headed the way of the Bryzgalov:

The Anaheim Ducks, needing to trim payroll, have placed defenseman Mathieu Schneider on waivers with the expectation that a team will claim him and $5.75 million salary for this season.

Once they move Schneider off the books, the Ducks are expected to re-sign Teemu Selanne.

I don't really have any problem with this move, as I have been expecting very little in return for the productive Schneider. Basically, the ability to get under the salary cap and to bring back the Finnish Flash is plenty of return for me.

I'm in quite the hustle this morning, so this is a hasty post (note the previously-posted image), but I'll put together something more once he's claimed (if he's claimed, I guess). Still, feel free to react to the move in the comments.

[EDIT, 1 PM: As usual, the OC Register's Dan Wood provides the best perspective on the situation and its possible outcomes.]

[EDIT, 3:30 PM: Looks like the Kings are going to pass. Probably because it costs money.]

[EDIT, 4:30 PM: Moving away from MSM blogs (side gripe: I guess I should comment anonymously at these sites; both the OC Register and Inside the Kings have removed my comments presumably because I write for BoC. Hooray for freedom!), The Falconer makes a numbers-driven case for why the Thrashers should pick up Schneider.]