Share All sharing options for: Hockey Players are Good Athletes 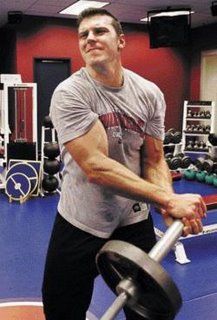 This isn't relevant, I just love this picture.


Over at Kings Vision (the multimedia arm of LAKings.com) there are interviews with Dustin Brown and Alex Frolov, discussing what they have been doing to improve their fitness during the off-season. Brownie has been doing a lot of sled runs over at the roller rink at Toyota Sports Complex along with a little muscle building*, while Frolov has been doing a lot of plyometric exercises and joke cracking. It's kind of cool if you are interested in that sort of thing.

*The dude looks pretty built. He was listed at 200 lbs. last year but there's no way he weighs that little this season. 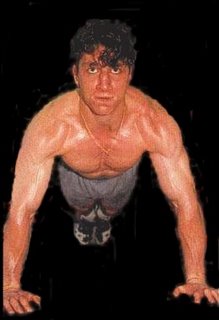 
It's kind of funny when you watch that sort of thing because you kind of forget that hockey players are such good athletes. I tend to think that there's 2 kinds of strength: there's the ability to lift shit and then there's endurance. Hockey players are probably the best fusion between the two, but we never really notice it. We don't notice it because hockey players wear long sleeves (so you don't notice that they're actually ripped) and because skating doesn't look hard. (Also, I think a lot of people assume hockey players aren't good athletes because they're not black, but that's another argument for another day.) I have friends that wonder why hockey players are only out on the ice for 50 seconds at a time and they just refuse to believe that the guys are basically sprinting out there for the half their shift. It's good for us to remember that these guys are great athletes.