Letters from Switzerland, Part I

Share All sharing options for: Letters from Switzerland, Part I

(Author's note: we at BoC sometimes like to pretend we get letters from Switzerland and creatively write some shaky English to make a semi-comedic point. This is not one of those times; I'm totally serial.)

I'm often amazed how big this internet thing really is. Late last night I had a note dropped in my inbox from a Ducks fan from Switzerland:

Just had a very good laugh when I was reading your Ducks Special on the pens blog...that nickname story is funny :D

Well...I'm starting my studies for a Master degree next year...in english. And because I still don't feel that comfortable with the english language, I need to practice it a bit...so I thought some writing would do me good.

Would you publish a short article if I wrote something? Can't really guarantee you a high level of grammar or a wide vocabulary...so you would definitely have to correct my text! (Just that you know that it's not an easy job for you as well) :)

My idea: "Your NHL days are over? Come over to snowy Switzerland" and write how some former Ducks (Sean Hill, Caron, Marha, Chouinard and Mowers are currently here) are doing...hope to include a few pictures, to make if funnier (or is it more funny?).

Needless to say, this was too big an opportunity to pass up. I'm always ready to post reader submissions, especially ones from outsider perspectives. So I wrote back a lengthy version of "Sure, go nuts" before going to bed, and this morning I got this. Per Markus' instructions, I've done a little bit of proofreading, but probably not as much as I should have; there's a ton of charm in idioms-gone-wrong. Enjoy!

Well...hi all :) This is my first submission (it could very well be my last) for BoC. I’m starting a master course in english next year, and as a native german speaker, I thought I could mix the inevitable (improve my english skills) with pleasure (the Ducks). Hope you enjoy the read...

Enjoy a few seasons in the country of
chocolate, watches, and the alps
Part 1: Josef Marha
And no, it’s not Sweden, folks!


7 goals in 12 NHL games – Ducks fans thought they might have found their new 2nd line center when Josef Marha scored 7 goals along with 4 assists in the last 12 games of the 97-98 season. But apparently, Marha spent more time sipping excellent czech beer than working out, as the start of the next season did not work out as planned. After just 10 games (with one lone assist) with the Ducks and some more games in the AHL, Marha was traded to the Blackhawks.

But it took another 2 years until Josef decided that 40 games a season, the alps, short road trips and a salary close to the NHL minimum were better than what he had overseas and signed a contract with the HC Davos in Switzerland (which is the former Club of Jonas Hiller). 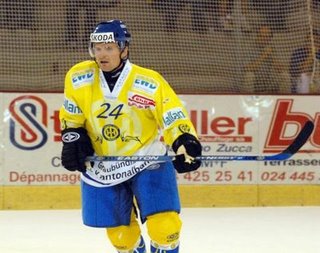 He immediately regretted his decision after seeing the jersey.

The Swiss League, unlike the NHL, allows a maximum of 4 foreign players per game. As a result, foreign players are often pure Scorers (Todd Elik, Simon Gamache, Alexandre Daigle) or offensive defenders (Petteri Nummelin). The signing of Marha, not really known for his goalscoring, would turn out as a bonanza for Davos all the same. [Sleek note: there's no way I'm changing that sentence!]

Marha quickly turned into the favorite player of his new coach, Arno del Curto: "He never complains, puts the team above himself and adapts quickly to a new situation due to his intelligence on and off the ice. He does the little things which are so important for the team but are not recognized outside the rink. My respect for him is huge." 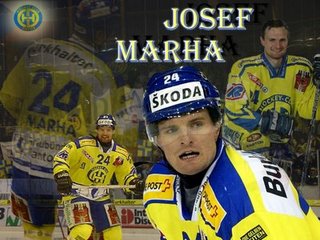 And Marha did not only give 100% on the ice. Back in 2003, the Davos Hockey Club was in financial troubles, and a forced relegation lurked. When the management asked the players to take a paycut to keep the club in the league, Marha was one of the first players to accept a lower salary.

But the task is not always easy for the defensive center. Playing on the first line with two former first round picks Alexandre Daigle and Michel Riesen one night, then with two 18-year old rookies in the 4th line the other night needs a lot of adaption. "The younger players really look up to Josef as a role model in our team. He makes everyone on his line better and executes instructions to a hair." [ :) ]

During the lockout-season 04-05, Marha showed that he could take an offensive role as well when placed beside skilled players. And with Joe Thornton, Rick Nash and Niklas Hagman boosting the offense of the HCD, Marha blossomed offensively with 40 points in 44 regular season games and more importantly, the OT game-winner in game 5 of the finals.


But for his coach, this was only an extra. "As long as he works so well defensively, I would keep him in the team even if he would finish the season with zero points."

And most of the fans of the HC Davos would probably agree... 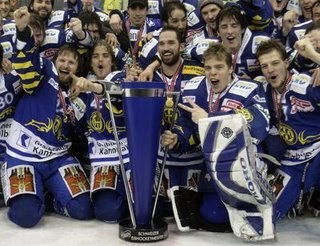 So that's Markus' first entry, and he's right -- I totally remember being high on Marha after that 7-goals-in-12-games end of the season. Who knew he'd ultimately find a heroic role in Switzerland? I didn't really do too much correcting in the piece (a couple spelling errors, and did you know that the Swiss use double-commas to start quotations?). I definitely will post more former-player reports if Markus is willing -- any reader requests?

As I said in the beginning, though, it's quite amazing how wide-reaching this internet is. That there's Ducks fans in Switzerland makes me damn proud.

As a bonus, Markus has also created this beauty: The Ultimate Duck. 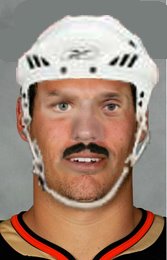 Per Markus, there are seven players that he's blended together make up this warrior. I don't even know the full listing, but who can you spot?