Quick Impressions from the Preseason Opener

Share All sharing options for: Quick Impressions from the Preseason Opener

I don't have time to do a full write-up on yesterday's preseason opener between the Sharks and Ducks, but I did want to report on a few interesting items. It was a pretty fun preseason game, actually, between all the fights and goals. I didn't end up taking any pictures (that's PJ's specialty, not mine), but that doesn't mean that I wasn't there! 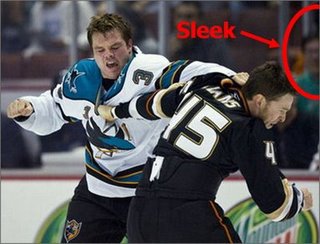 Look, there's half of me, grinning stupidly about two seconds before Evans got floored. 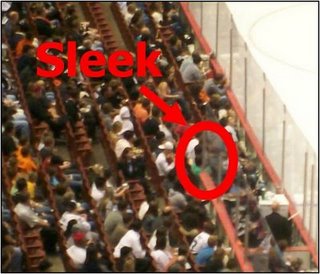 Here's the main three takeaways I wanted to point out about yesterday's game, though.

a) What the hell, Anaheim? There was a bigger crowd in attendance last night than I've ever seen for a Ducks preseason game, to the point where I was getting pissed off about it. I mean, I understand that full houses are good for the team's revenue, but preseason has always represented a chance for me to come to a half-empty arena and enjoy easy parking, short lines, and crummy preseason hockey. Yesterday all I got was crummy preseason hockey. I don't really know why so many people showed up (and it certainly wasn't a full house), but it definitely caught me off-guard.

b) Question for Sharks fans: Who is this midget named Vesce? During last night's game, I was trying to learn about Ducks prospects, and pointed out to my friend how Ryan Dingle reminded me a lot of Andy McDonald -- small, quick, and clever with the puck. My friend replies, "That's the smallest skater I've ever seen!" I say, "Aw, he's not that little," but then realize that my friend isn't talking about Dingle at all. No, in fact there's an even littler dude skating around for the Sharks, Ryan Vesce. He didn't end up getting very much ice time, but we spent a good deal of time devising offensive plays for the Sharks that went something like this: "OK, Alex Semenov skates into the offensive zone and calls for a pass. Then out of nowhere Ryan Vesce jumps out of Semenov's breast pocket, steals the puck, and scores!" 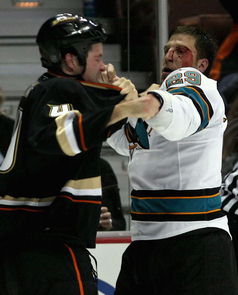 c) The fight highlight of the night: Clowe gets "Bravehearted". The first two periods were littered with fights, mostly from players trying to earn jobs in the future, but even legitimate NHLers decided to get into it. For some reason, Kent Huskins, a guy I've always considered soft and laid back, decided he was sick of my opinion and decided to trade blows with Ryane Clowe. I was kind of shocked, because Clowe does have NHL fight experience, and pretty much I hoped that Huskins wouldn't get too badly hurt.

However, not only did Huskins hold his own in the fairly lengthy fight, but he even managed to cut Clowe pretty good above his left eye (you can see some if it in the picture to the right), and by the time the fight was over, half of Clowe's face was covered in blood. Now in full honesty the fight was pretty much even, but based on the blood spilled, the Anaheim crowd gave Huskins the biggest ovation of the night.

Clowe did return to the game after getting cleaned up, but the emotional damage was done. We even ended up coining a term for it, too. Clowe, you got "Bravehearted", dude. By Huskins, no less. Who would have thought?