Share All sharing options for: Random Pacific Questions: Are the Kings really going to sit out Kopitar's bargain year? 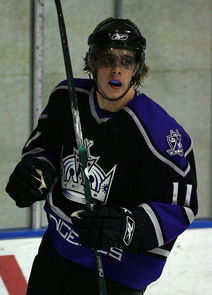 I know "Random Pacific Questions" is Rudy's gig, and I don't really mean to be spiteful or anything, but I do have an honest question for Kings fans: Really?

The Kings are going to put as little funding as possible around Anze Kopitar and Jack Johnson in this -- their last bargain season -- and you're all cool with that?

Let's clarify my thinking a bit. You see, I'm a believer in bargain years, which for a productive player is usually the last year of an entry-level deal. Because while good players will still improve even after their first contract is over, it seems near-impossible for them to become better dollar-value players, especially if they've put up some good numbers as youngsters.

On the Ducks for example, Ryan Getzlaf and Corey Perry just finished off their bargain years -- while I suspect that both players will be better top-liners this season than last, I would rather build a team around last year's duo for $1.3 million than this year's duo for $10.7 million (rough numbers). The change in talent / experience / production won't come near to matching the change in salary. With cheap kids in the lineup, more money can be spread around to other positions (nearly $20M thrown at three defenseman slots, for example), and overall there have been some groovy results for the Ducks -- see our non-empty cup case.

On some other coast, some kids named Crosby and Malkin also finished up their collective bargain years (Crosby got his raise this summer; Malkin's up next summer), and filled last year's roster with enough talent to lose gracefully in the cup finals. True, both the Ducks and Pens are now feeling the squeeze of those raises and have to compensate by losing talent elsewhere. That's not to say that these teams are finished or anything; they'll just need to find other Getzlafs and Crosbys -- guys who will outpace their salary. But at least both teams were able to take advantage of their young-gun bargain years; they didn't sit on their hands until after those players got raises.

By the way, entry level deals aren't the only source of bargains by any means. Detroit gets a bargain by signing goalies for peanuts and having star players sign team-friendly deals. Anaheim has found bargains in a washed-up Selanne a few years ago and undrafted players like Penner and McDonald. Still, young talented players is definitely a milkable source for bargains in a salary-capped league, and by my eye the Kings are dealing with a few of them.

So is the best strategy for the Kings really to "sit this season out" and promise to spend money sometime in the future, when Kopitar and Johnson are quite expensive? As a reformed gambler, that strategy makes very little sense to me. I mean, of course more money will need to be spent in the coming years, just to keep the same team together. And as the Kings are a team that already are bemoaning their annual financial losses, I really don't see how they plan on actually adding talent to a Kopitar-and-Johnson roster in the coming years -- that would require a huge increase in spending (raises plus additions/upgrades), which seems unlikely at best.

Now I'm not the biggest Kings fan on this site, so it's quite possible I'm not seeing the full picture here. Perhaps Lombardi has a plan where he's going to use some other bargain years (Doughty and friends) to build around, and maybe there's even a plan (cough, Schneider, cough) to still better this year's roster. And maybe there's really no envisionable win-scenario for the Kings: even if they spent to the ceiling the Kings couldn't compete with the big boys in the west.

Still, if you tell me that (a) Kopitar is the real deal, (b) this is the cheapest he will ever be again, and (c) Kings fans do actually enjoy winning, I don't know why everyone seems to drink so much Lombardi Kool-Aid when it comes to cap-floor spending. If you asked me what would be the better team -- if the Kings spent to the cap ceiling with a cheap Kopitar this year, or if the Kings spent to the cap ceiling with an expensive Kopitar next year -- I'd fully expect this year's team to be the better version, because there's so much extra money to spend elsewhere. Isn't this the year for the Kings to go for a gamble, instead of essentially folding before the flop? Is Kopitar's best-opportunity window shutting, or am I just crazy?

Rationalize it for me, Kings fans.

(p.s. I don't really want to hear "but the Kings need to save cap space next year for Kopitar's raise!" as a valid excuse. It's very possible to spend money this season without touching next year's cap, and even if they did, it's not that difficult to ditch salary if needed -- see all the teams unworried about their current over-the-cap situation this late in the summer.)