Random Pacific Questions: Who Has the Best Goalie?

Share All sharing options for: Random Pacific Questions: Who Has the Best Goalie? 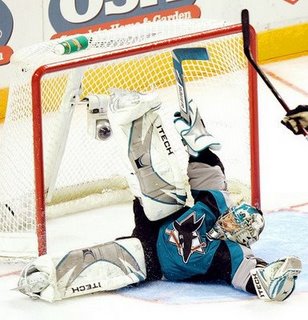 He looks like the dog at the end of those Honda Element commercials. "Hey, what's going on back there?" ...I'm not good at captions.

The Kings, right? No? Okay, someone else then.


I'd put it Bryzgalov-Giguere-Nabokov-Turco, but that's just me. Giguere has the best numbers but he didn't play nearly as much as the others, while Nabokov has relatively weak numbers but played a ton. I didn't realize Turco had a subpar season (by his standards) last year, but then he picked it up in the post-season while Giguere faltered. Say it with me, folks: clutch doesn't exist.

I'll be very interested to see how JS Giguere, Evgeni Nabokov and Marty Turco react to next season. All three are getting into their 30's all three have carried their teams the last few years. The Ducks are in pretty good shape if Giguere misses more time next year because Jonas Hiller is a bad man, but the other two have question marks behind their starters. I imagine Nabby will take a few more games off as Dmitri Patzold and Thomas Greiss mature and it'll work because their San Jose goaltenders, but the Stars don't really have anyone currently with the team or in the pipeline to fill Turco's shoes. Could this be the year those three start to fall off? God I hope so.