Share All sharing options for: Random Pacific Questions: Who's the Sharks' Best Defenseman? 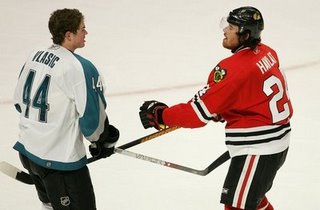 A vicious slapfight occurred right after this picture was taken.

The Sharks were the 3rd best defensive team in the NHL last season, allowing only 187 goals. A big part of this was their underrated defensive core that limited opposing offenses to about 24 shots on goal a game. The Sharks didn't get a whole lot of offensive output from their defense, however, so they brought in two veterans to help with that side of the puck. Dan Boyle and Rob Blake both have a rich pedigree in the NHL and will undoubtedly help the Sharks put the puck in the net, but will they deserve top minutes for the Sharks? Who is the Sharks' best defenseman?

My personal opinion is that it's Marc-Edouard Vlasic (he of the newly minted 4 year, $12.4 million dollar deal). He's only 21 but he was named the most valuable defensive defenseman by Alan Ryder after finishing 3rd the year before.* Sure, he doesn't score very often, but he literally suffocates opposing offenses. It'll be interesting to see how new coach Todd McClellan integrates new additions Dan Boyle (who missed half the season last year) and Rob Blake (who is probably best served playing mostly special teams at this point in his career). Will they play the most minutes because they're highly paid and "have been there before," or will he (rightfully, in my opinion) stick with Vlasic and fellow youngster Christian Ehrhoff in crucial situations?