Share All sharing options for: Random Pacific Questions: Who's Your Langdon Alger?

I love my team. I've been following the Kings since before I could tie my shoes (I've got it down to where I get one loop; where do people get the other one?) and I've hated the Ducks and Sharks since snap bracelets were cool. Still, I admit that I sometimes look longingly over at the other side and have dark dreams about one of their players. It's never someone like Joe Thornton for me (although I would go to the south of Spain with him if he asked me); I always enjoy the quiet boy in the corner that enjoys puzzles. I love the Langdon Algers of the world. This season, my Langdon Alger is Torrey Mitchell. 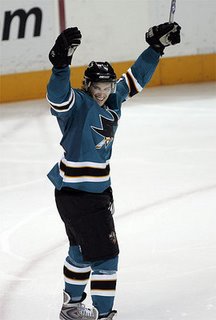 
I'll be honest, I don't really know why. I mean, he's a good young center, but he's not the kind of person that should make my pants tight. I think (from my limited viewing) that Mitchell is a pretty good defensive center and he and Mike Grier did a good job shutting down opposing scorers last season. Mitchell can't really score or anything like that, but I'd say he's one of the Sharks most important players. Plus, he's only 23. (What's with the Sharks having great young defensive players?) I was silently hoping that the Kings would sign him to a $3 million dollar offer sheet this off-season, but Lombardi was content to give that money to Jarret Stoll. If the Sharks put Mitchell with Grier and someone like Ryan Clowe, I just may have a wet dream. It's crazy, but I dare say that Mitchell may eventually become the best defensive forward in the Pacific pretty soon. Like, this season. Suck it, Pahlsson.

I mean, watch this:


How can you not love this guy?

So who do you guys have an irrational love for? Can't be someone on your own team, but it can be someone that was on your team but has since moved on.