(Okay, I wrote this and then realized it wasn't really a review. Oh well.)

Matt Moulson and Peter Harrold are often overlooked in the Kings' prospect plans because both aren't really prospects. Both are about 25 (Moulson is 24 'til November) and neither projects to ever be a top-flight player. Right now, though, they're exactly the type of prospects the Kings need. Most of the Kings' great prospects are 21 or younger, so guys like Moulson and Harrold are needed until the Kings determine which of their younger prospects are going to pan out. Of course, there is a downside for them: they're only good until those younger prospects come up and then guys like them usually get tossed to the side. Both Moulson and Harrold have maybe one year to prove that they're valuable NHL players or else the Kings are going to cast them aside for a younger model. 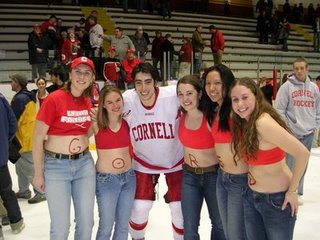 Matt Moulson will never make a highlight reel unless he's on the receiving end of a hit, but he has a good nose for the net and has a nice shot. He's also a solid defensive player, something the Kings sorely need. I could definitely see new coach Terry Murray falling in love with a dependable player like Matt Moulson and giving him more minutes than someone like Ted Purcell. Ideally, Moulson would be playing on a line with Michal Handzus, because they had good chemistry last season and Moulson provides a speed element that Handzus lacks. I honestly wouldn't be surprised, though, if Moulson ends up finding a few minutes up alongside Anze Kopitar. He's a good player for a 1st line because he doesn't need the puck to be effective. I could see Moulson molding into a player similar to Chris Kunitz but without the physical element and the squishy face. 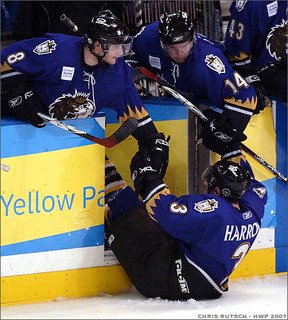 Peter Harrold is basically Matt Moulson but on defense. Though not big, Harrold is a pretty physical player that can score and defend pretty well. I think he hasn't found an NHL job before now because he doesn't fit any particular mold for what a defenseman should be. He's not quick and agile like Lubomir Visnovsky and he's not big and powerful like a Sean O'Donnell. He's just a dependable bottom-pairing defenseman. The Kings could really use guys like him right now.

Moulson and Harrold have a unique opportunity this season. They're getting a chance not many guys like them get; a full season in the NHL to prove that they're more than just filler. It will be interesting to see how they react. I have a gut feeling they'll step up to the challenge and prove themselves before the season is over.