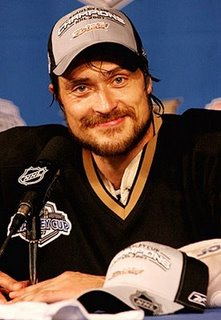 Teemu Selanne is back. The Finnish Fucker signed a deal that works out to $2.625 million dollars a year, or $.1 million dollars less than Kyle Calder. Mother fucker. I assume this means either Todd Marchant or Francois Beauchemin is out now, although who knows what kind of crazy schemes Brian Burke has planned. I think they should trade Sammy Pahlsson. Earl will probably have more analysis, this is just so you guys can go, "Wow, Teemu Selanne is awesome.*"

Did Selanne want a 2-year deal because he wants to play in the Olympics again? Sure, why not.

*If you had to bet in 2000 on either Teemu Selanne, Paul Kariya or Rob Blake abandoning their team and becoming hated by that fanbase, wouldn't you have picked Selanne? It's weird how he's now the greatest Duck in their short history. Also, that question I just asked was gramatically fucked.