Barnyard Miracles! Bobby Ryan turns from a Duck to a Pig

Share All sharing options for: Barnyard Miracles! Bobby Ryan turns from a Duck to a Pig 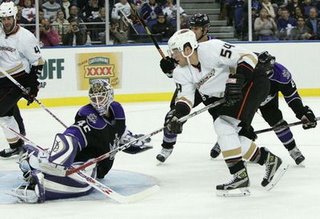 Poor Bobby Ryan. The kid picked one slot behind Sidney Crosby hasn't had much opportunity to shine on an NHL stage. He played in his first 25 NHL games last year, including 2 in the Dallas series, and after a strong camp this season, was demoted yesterday to the AHL Chops mainly for salary cap reasons.

This is a situation that it's a bit tough to write about, because there's several unknowns at work here: (a) Bobby Ryan's bonus clauses -- thanks to NHL secrecy, I have no idea what Ryan would need to do in order to earn his $1.1 M in bonuses, though I'd guess they pertain to NHL-level achievements. If Ryan started on the Ducks, though, the $1.1 M would count against the cap as potential achievements, and I can't say at what point these bonuses become unachievable. (b) Bobby Ryan's potential -- I've liked what I've seen out of the kid in limited exposure thus far, but Ryan's played most of his hockey completely off my radar. I assume the kid is good, because of draft position and all, but really it's all question marks until it happens on NHL ice. (c) the Anaheim Ducks' need -- This is a biggie -- the Ducks will have Getzlaf-Perry and Morrison-Selanne on their top two lines, and Chris Kunitz will definitely get one of the open wing spots. There's plenty of bodies for the bottom lines also -- Pahlsson-Moen-Niedermayer + Sutherby-Marchant-Carter + Parros-Ebbett-May. Assuming somebody can handle a cushy promotion, I'm not that worried about forward depth this year. There's no Doug Weights or Todd Bertuzzis that need to be hidden in the top lines, at least.

On July 1st, when Corey Perry signed his 5-year contract, I wrote a post looking at how various wingers did next to Getzlaf-and-Perry. It wasn't a fabulous study, but it did show a trend how a "banger" like Brian Sutherby, Brad May, or Jason King got better results than a "scorer" like Kunitz or Bertuzzi. Getzlaf and Perry have always thrived with a Fedoruk-type on their wing, and perhaps that will be the forward solution this year; last night Travis Moen got an audition on the top line (and congrats to Teemu on the hat trick -- fucking awesome). Anyways, forwards can be a discussion for another day, but I don't get the sense that the Ducks need Ryan desperately to become any NHL-level hero just yet.

And that's probably why I shrug at the news that Ryan has to wait his turn to make an NHL impact. I'm always a guy who's in favor of over-sheltering young talent, for maturity reasons and for salary-impact reasons. Ryan Getzlaf and Corey Perry can be a quick example here. When they were brought up to the NHL, it was in a no-pressure situation: 4th line minutes with Fedoruk watching their back, and not a ton of scoring was needed out of them. Even when they got sent down to the AHL for a month or so that first year, that lowered the pressure even further -- they weren't in any Calder Trophy race, for reasons outside their control. Year Two was stepped up a notch -- they were in cushy 2nd-line spots but more scoring was expected (and delivered) that year. And now they're affordable NHL stars.

If Bobby Ryan is really a future cornerstone of this franchise, what's not important to me is the NHL impact he makes in the next two years; he probably needs to do enough to demonstrate he's on the right path, but it's important to remember -- the more NHL achievements he gets, the more expensive his next contract becomes. I don't want him winning any Calder Trophy (which is safe anyways, since he plays on the west coast), and I'd rather not see any 90-point years just yet. I know it's twisted in a way, but holding back Ryan is probably good for the kid and good for the franchise. And I am kind of encouraged by this Bobby Ryan quote about the downside of contract bonuses:

"You just want to warn guys that it could be something that comes back to bite you. I'd waive 'em in a heartbeat if I could – take it down to the league minimum or whatever it would be. When it's right there in front of your face and it's a couple hundred thousand dollars that's hurting you, it's tough."

If this kid can somehow get that team-friendly-contract notion in his head now, I'm feeling pretty optimistic. Now don't get me wrong -- I'm hoping Ryan kicks ass in the AHL and forces Burke to put him in the big leagues a la Be a Pro; I expect he'll be easier to promote later in the season when bonuses become unattainable anyway. If he plays well enough, Bobby Ryan can be this year's trade deadline day pickup, and hopefully enjoy a relatively pressure-free transition into this league, just like Getzlaf and Perry did before him.

Color me an optimist; Go Ducks.