Bertuzzi, The Karate Kid and Forgiveness

Share All sharing options for: Bertuzzi, The Karate Kid and Forgiveness 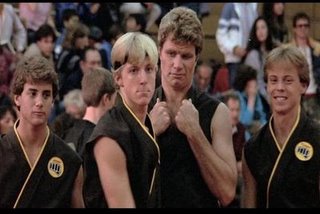 
Aside from linking the Hockey Orphan for the Kings, Stars and Sharks this should be the last bit of shameless self-promotion for quite a while. And, if I do say so myself, it's a damn doozy.

In order to break up some of the monotony that is Tuesday, I'm starting up a tradition on Cycle like the Sedins called "Bertuzzdays."

Basically, it is a weekly tribute to the most shameful and sometimes hilarious moments in hockey history. This week, naturally, begins with a study of The Todd Bertuzzi incident.

Then quite unnaturally, it devolves into a troubling comparison between that Vancouver Canucks team and Cobra Kai from "The Karate Kid." Eventually, "The Jesus" makes an appearance and all hell generally breaks loose. It does end with an intriguing question, though: what would Bertuzzi have to do to gain your forgiveness (or at least your respect)?

Hopefully, you'll find this Bertuzzday as entertaining as I find it psychologically damning.