Share All sharing options for: BoC Gameday: I Just Want a Goal

The Kings' 2 games against the Sharks illustrated the importance of the last change in hockey. In the game at San Jose, the Sharks matched up the Thornton line against the Kopitar line while Mike Grier skated against Alex Frolov. The result? 13 shots on goal for the Kings. Kopitar and Brown couldn't do anything with the puck because Thornton never let them have it. It was extremely frustrating to watch your top line go out there and then flail around like a little nerd trying to get his backpack back from 2 bullies. 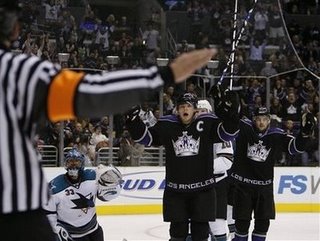 The 2nd game was in Los Angeles and the Kings looked a lot better. Kopitar's line was able to skate against Jonathan Cheechoo's line most of the time while Michal Handzus was able to skate against Joe Thornton.* The Kings were able to shut down the Sharks, for the most part, and generally looked competitive. They still couldn't score (legally, anyway) but they didn't look that bad.

*Matt Greene is kind of built to slow down Joe Thornton isn't he? He's big and mean and he's not very fast, but neither is Joe so it's not that big of a detriment. He's going to get destroyed by guys like Gaborik and Kane but he's good against guys like Thornton.


The Kings skated Matt Greene with Denis Gauthier after Jack Johnson got hurt in the last game, while Doughty and O'Donnell skated together. Drew Doughty ended up leading all defensemen in ice time last game, which is both awesome and terrifying at the same time. He looked much better the last game, but I worry about him tonight against that Anaheim forecheck.


In the Saturday game the Kings skated Kyle Calder and Brad Richardson, while in the Sunday game they skated Brian Boyle and Patrick O'Sullivan. O'Sullivan was the best forward on the ice for the Kings in my opinion and seems like he's ready to go. I liked Boyle more than Richardson because Boyle is big, but I like Richardson more than Simmonds. I think Simmonds and Moller could both use more time in the minor leagues.


I would try to guess what the Kings' blueline is going to look like tonight, but it doesn't really matter; we're just fucked. All I want tonight is a goal. I missed Frolov's goal because I was en route to a buddy's house to watch the game and they had both goals called back on Sunday. I just want to shout, "Yeah!" and then look around awkwardly while my roommates tell me to get a life once, okay? 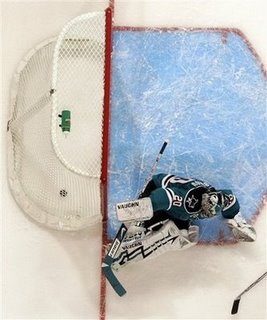 Yeah, this? Didn't see this.


Prediction: Kings win, 4-3. Goals by Kopitar, Handzus, Moller and Gauthier. Brian Boyle and Raitis Ivanans get their first fights in.

"You want to get that one big hit where you feel like you're part of the team,'' Stairs said. "Not that I don't feel like I'm part of the team, by no means, but when you get that nice celebration coming into the dugout and you're getting your ass hammered by guys, it's no better feeling than to have that done.''