Share All sharing options for: BoC Gameday—Technically, somebody's getting a "W" tonight

Sorry I've been a bit invisible the last couple of days; I've been steering clear of the blog, mainly because of the frustrating play of the Anaheim Ducks. It's not just that they're 0-2 that bothers me (only once in franchise history have the Ducks started 2-0), but it's the manner in which games are being lost that really sucks.

It's a pattern that dates back to the Dallas series last spring, and I've put a table together that lists the last seven times an opponent has broken a tie against the Ducks. All seven times the Ducks also allowed the next goal for a 2-goal deficit, and in six of seven times the lead was extended to 3 goals, on average less than 20 minutes later. 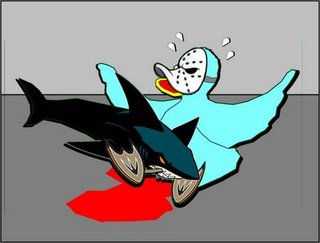 "When you're done chewing off my right leg, please help yourself to the left.
And don't forget the tasty throat!"

So the Ducks need to solve two problems:

Basically, the Ducks need to stop shitting the bed. Two games in, and the Ducks have scored three goals -- one each from Rob Niedermayer, Ryan Carter, and George Parros -- all scored while the Ducks trailed by 3. That trio of forwards looks to blow out its 13 combined goals from last year, but if anyone who was actually projected to score goals could put the puck in the net, that might help things considerably. So far, Nabokov and Bryzgalov have picked up fairly easy wins, way too reminiscent of the easy wins that the Ducks gave Turco last spring.

As for the 0-2 Kings, Rudy can probably better fill you in, but their problem might be as simple as "let's stop playing the Sharks".

Prediction: Who really can say with this club? Ducks 3, Kings 1. Goals by Klee, Pahlsson, and Pahlsson.