BoC Gameday—What Scares Me About Your Team

Share All sharing options for: BoC Gameday—What Scares Me About Your Team

Ah, the beauty of a new NHL season afoot, and what better way to kick it off than with a good ol’ Battle of California (competitive version)? Yeah, I know there were some "counting" games already played in Europe, and Ducks/Sharks is the only game on tonight's schedule without some version of national coverage, but I can’t care. Because tonight is Ducks-Sharks, one of my favorite matchups since the lockout. It's a measuring-stick game, a pride game, and an awesome way to start the NHL season (assuming the Sharks have paid their electricity bill this year).

To open this set of Gamedays and this NHL season, Mike Chen and I devised a little cross-state exercise. You know Mike, of course, from Battle of California, though I heard he has some side gig too. Anyways, instead of rehashing our own previews again, we instead decided to write about the opposition this time with three answers to: "What Scares Me About Your Team", a nice outsider's perspective to start the new year.

What Scares Sleek about this year's Sharks:

The last three seasons, the highest scoring San Jose blueliners have been Craig Rivet 07/08 (74 gp, 35 pts), Matt Carle 06/07 (77 gp, 42 pts), and Tom Preissing 05/06 (74 gp, 43 pts). In each case, it's a career scoring high—none of them have demonstrated tremendous scoring ability away from Jumbo Joe. The lack of a true offensive talent on the blueline has been the Sharks' Achilles Heel, their missing ingredient in a sense. Finally at the end of last year the Sharks inserted an actual offensive defenseman – Brian Campbell – and the results were stellar. In 20 gp, Campbell recorded 19 points, and while that 78-point-season pace might not have been sustainable for a full year, it still showed the potential of using a creative talent behind San Jose’s glut of forwards. 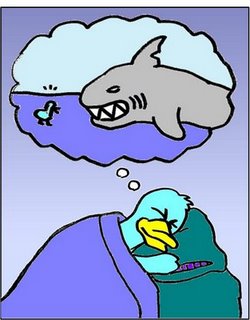 Bring in Dan Boyle, and to a lesser extent Rob Blake. Boyle is a guy who’s already registered a 63-point season and two 53-point years, so he’s shown the ability to play well with top talent in Tampa. I haven’t watched a ton of Lightning games, so I can’t say for sure, but if Jumbo Joe is able to bring out a career year out of the Sharks’ new blueline threat, San Jose threatens to be a Pacific monster this year.

I’ve been reading some of new coach Todd McLellan’s motivational quotes over at the Seagate Broadcaster’s Blog, and his overall message has me worried. Not so much the "I don’t just want a hockey player, I want an ingredient" bit; other than some cannibalistic overtones that message is pretty routine. But how about this McLellan gem? "At this point in the season, the words ‘Stanley Cup’ aren’t part of the vocabulary." First off, McLellan, I don’t think that’s very fair to Marcel Goc, who doesn’t have a very wide vocabulary to begin with. You’re going to take away two of his possibly twenty cohesive words?

But all kidding aside, I think McLellan seems to be doing the right things as a new coach for what’s been a tremendously successful team. He’s making the players better understand their roles for the team’s success, and is making sure that the short-term details that contribute to winning don’t get lost in the long-term goal. Of course, media quotes and on-ice performance can often be two different things, so I’ll reserve judgment, but I have to imagine the Sharks will be well-prepared for opening night.

Yes, I know that Cheechoo is coming off his worst offensive campaign since his rookie year, and his preseason performance still has some Sharks fans worried, but that doesn’t make things less scary on my end. Cheechoo is the very definition of streaky – even in his good seasons he got hot and cold very fast. I wrote a post in the latter part of the 06-07 season that pointed that out: "4 goals in 2 games against the Ducks, which was preceded by a seven game goalless streak, that followed a 5 goals in 7 game stretch, that followed a 1 goal in 9 games slump, and well, you get the picture." Also revealed in that post was the trend that Cheechoo scored at a much higher rate against the Ducks and Kings than against any other opponent.

The Sharks figure to have a very good team this season even if Cheechoo has another off year. However, if he gets anywhere near his pre-injury form, the Sharks will be awfully tough to keep up with in the standings this season. I guess my main hope is that Coach McLellan finds Cheechoo to be a very tasty ingredient and eats him, but that probably violates the CBA.

What Scares Mike Chen about this year's Ducks

Picture this. You sit down and you really want to have a kick-ass marathon of the Mighty Ducks movie trilogy. You've got your shiny Mighty Ducks DVD and your old VHS copy of D3: The Mighty Ducks, but you don't own the second movie and you can't afford the gas to drive to Best Buy and pick it up. But halfway through your viewing of D3, a buddy calls and says that D2 is on the Disney channel RIGHT NOW so turn the channel immediately. That convoluted movie-viewing experience is kinda like what happened to the Ducks last season without Scott "My Captain C, Damn It!" Niedermayer and Teemu Selanne to start the season.

You take those guys out of the mix, add in some bad broadcast-on-cable-TV replacements like Todd Bertuzzi and Doug Weight and it's just a chemistry experiment gone awry. And while Scotty N played well upon his return, you could sense that something wasn't quite right with last season's Ducks, even from all the way up in the Bay Area. So now Brian Burke's guys have no off-ice distractions, Corey Perry and Ryan Getzlaf are a year older, and the Norris Twins get a full 82 games together. Yeah, that's not good.

Oh, stop laughing. I'm not talking Brendan Morrison by himself, I'm looking at what Brendan Morrison could possibly do for the rest of the team. Morrison's a playmaker. Teemu Selanne's a goal scorer. Goal scorers need playmakers to make them even better (see: Cheechoo, Jonathan). If Morrison clicks with Selanne in an Andy McDonald-minus-the-freakish-neck-muscles kind of way, that gives the Ducks two pretty strong forward lines. We know Perry and Getzlaf will get their points but what about secondary scoring? 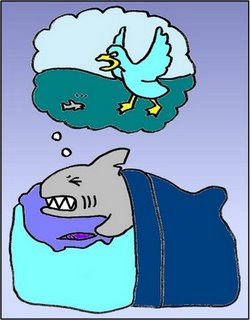 Last season, I don't think I was the only person who laughed when Burke signed on Todd Bertuzzi's diminished scoring abilities. We know that Selanne still has it but if Teemu's got a partner that can actually dish him the puck, he becomes that much more of a threat. Teams with one scoring line don't usually accomplish much (hello Vancouver), but when you start spreading that around, that's when the proverbial shiznit hits the fan.

You could say that this point is an extension of the first one, but that one was really more about off-ice distractions and general roster discombobulation. This is about having two Norris-quality defensemen who can handle 30+ minutes a night, play special teams, send out a great outlet pass, and shut down the opposition's top scorer. With all due respect to the Detroit blueline, there's simply no team that can match what Anaheim can do -- that is, have one Norris-candidate on the ice at all times.

Put it this way -- the old adage of line matching doesn't work if you have either a healthy Pronger or Niedermayer on the ice. You can't try to avoid the shutdown defenseman because they're both capable of it. Hell, stick me out there with my limited beer-league skills and I'd still probably be a +30 for the year (Burkie, I'm a free agent and I'll sign for the league minimum). This combination scared me when Pronger first came to Anaheim and it still scares me today. And it's just not fair.

So that's our takes, looking trepidly at some of the new aspects of the opposing team. How about you, readers? What in particular this year scares you about facing either of these teams? Feel free to leave your own answers (even if you aren't a Ducks or Sharks fan) in the comments.

Prediction: Ducks 3, Sharks 1. Goals by Perry, Pahlsson, and Morrison. Just like in the Ducks opener of the 06-07 season, though, Rob Blake actually scores Corey Perry's goal. Adds Mike Chen, "By the way, Sleek's watching the game on Tivo so everyone text him 'Pronger broke his leg' intermittently."

Update 10:01: Mike sneaks in a prediction too: Sharks 4, Ducks 2. Goals by Marleau, Boyle, Roenick, and an empty netter by Grier. And soft crying in the rafters from Jeff Friesen.

p.s. I posted a PuckToon today that mixes metaphors about strange cap-motivated roster moves made throughout the Pacific Division. Enjoy!

[9:30 am edit -- even more Sleek guest appearances on the ol' internet! In addition to posting on James O'Brien's new blog, I was also a guest on the LCS Hockey Radio Show last night. I haven't even heard the whole thing, but feel free to give it a listen as we push through some technical difficulties, I hurriedly mis-describe Patrick O'Sullivan as "a poor man's Brian Rolston", and I pull a correct Caspian Sea trivia answer out of my ass.]