A Calm Condemnation of the Rinkside View

Share All sharing options for: A Calm Condemnation of the Rinkside View

As you are all probably aware, Fox Sports West has been experimenting with a new method of presenting a hockey game, called "Rinkside View." The view fucking sucks attempts to give the viewer a more up-close view of the action through cameras right above the penalty box and behind both nets. It was an interesting notion, but the view has been an overwhelming failure with the fans and is quickly becoming an black mark on the network and the Los Angeles Kings. Look at this poll on Inside the Kings: fans have risen up in protest against Rinkside View. If it were a bill, fans could override a president's veto to dismiss Rinkside View. The problems with Rinkside View are voluminous so I hardly see the need to discuss all of them, but I will take time from my busy schedule making my cat chasing a laser point to point out just a few flaws.

1) YOU CAN'T FOLLOW THE GODDAMN PUCK. Ahem, excuse me. The patricians that sit right near the glass won't tell you this, but in places like the Great Western Forum or the Pond it's actually better to sit in the top section, right in the middle. Why? Because you can follow the puck wherever it goes. When you sit close, other fans and players block your view of the action and present a incomplete picture of the play. Through Rinkside View, guys will come flying out of the corner of the screen and get a great shot off before you've had time to recognize them. It is infuriating for an experienced hockey viewer to be forced to watch the game through the eyes of a newcomer. 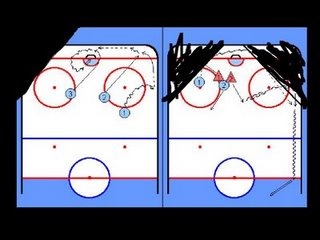 
2) YOU CAN'T FUCKING SEE THE POWER PLAY DEVELOP. On the power play, the Rinkside View switches to an end view, right above the goaltender. This is good because it lets you get a better view of where the puck is being aimed, but it comes at too high a cost: you can't follow the puck side-to-side. The camera is too close to the action so you can't see the two guys along the circles at the same time. (Consult my expertly-made chart for an example.) On the Kings' power play, those are the two most important players on the ice and most of the action goes through them. To see one of them the camera must pan over and block out the opposing point player, which often results in missing the shot when those two players connect. (What? Fuck it, I'm not rewriting it, you'll figure it out.) That camera angle is actually a good idea on the power play, but only if it's far enough away that you can see the whole sheet of ice.

3) WHERE THE FUCK DID HE SHOO-OHGODGETOUTOFTHEWAYGAUTHIER. When a forward takes a shot on goal, the defender on the opposite side of the ice always always always goes to the front of the net to help clear any potential rebounds. When the Rinkside View is used, this often means that the shot is obstructed from the far side by the defender going to the net on the near side. It's a Donkey Punch for the viewer and really, really fucking pisses me off.

4) I'M NOT USED TO THIS! I know, you're thinking, "Well that's a terrible reason to be against something," but hear me out. We're all used to the traditional camera angle because that's what works. It's the 2nd best way to watch a game* and the best one that's actually feasible. Rinkside View is like taking a chocolate eclair and then putting poo in it; yeah, it sure is different and exciting but I sure as fuck don't want it anywhere near me.

*I've always thought the best camera was the one high in the corner because you can see the entire ice at once. Sure you can't really see numbers, but if they're Kings I can tell by who they are by watching them skate and if they're not then I don't really care. Plus I can watch line changes!

Basically, the problem with Rinkside View is that it incorrectly presumes that the most important part of hockey is the man with the puck. There's so much more going on (guys crashing the net, the battle in front of the net, the trailing defender) that will actually decide the game that is not being shown so you can watch some asshole get taken into the boards. It forces the experienced viewer to watch the game through a newcomer's eyes and retards the growth of the newcomer by not allowing him to see the other parts of the game. It's like helping someone who can't learn the alphabet by removing the letters "Q," "I," and "T." Sure, they might be able to learn it faster but at what cost and what if they want to spell, "Quisling?" See, madness.


I did my first podcast with the awesome Brian Kamenetzky of SportsHubLA. My voice sounds weird. We go over the high points of the season so far and a few of the major storylines so you can listen if you want. If you don't want to then I think you should listen to it anyway and tell me how badly I suck. And check out the rest of SportsHubLA because it's pretty great and covers everything in LA and also the Chargers, for some reason.