The Kings signed defenseman Matt Greeene to a 5-year deal worth about $2.95 million dollars, ensuring that they'll always be able to balance out all their good puck-moving defensemen with a guy that couldn't handle the puck if you taped it to his stick. This is a weird deal. I've liked what I've seen from Matt Greene so far and he could very well be worth this kind of contract, but why give it to him now? Why not wait until the end of the season and see how Greene holds up? Apparently if Patrick O'Sullivan wanted a big deal from the Kings he should have gotten hurt for most of last season. 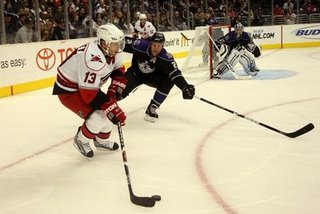 The Kings are hoping Matt Greene will eventually become just like Sean O'Donnell was on the Ducks, a solid defensive defenseman that can skate on a primary shutdown line with Jack Johnson while also chipping in 3+ minutes on the penalty kill. The name thrown around for Greene when he was with the Oiler was Jason Smith and that doesn't seem that unreasonable. Still, Greene is a long way away from proving he's actually capable of that. I mean, he's capable of that on a poor defensive team like the Kings, but is he capable of that on a playoff team? Maybe, but nobody knows yet. Now, we have seen that the market for defensemen that don't fuck up is pretty lucrative, so if Greene pans out then the Kings are going to make out okay. But that's the problem; at best, the Kings make out okay. There's no possibility that this deal is going to work out great. It's either just okay or terrible. It's a pretty big risk to take.

Michal Handzus, hockey god? The oft-mocked and ridiculed center has been making all the assholes (read: me) that made fun of him last season look like idiots. It's only 4 games but Handzus looks like an honest to God bad ass out there. He had a great chip-in goal while driving to the net (something I dont' think happened last season) and made a beautiful dangle and shot to win the game last night in overtime. The Frolov-Handzus-Simmonds line actually managed to win the battle with Eric Staal's line and Frolov didn't even create a goal. I've made my fun of Handzus in the past (he looks like Matt Stone from South Park... dammit, did it again!) but if he can play like this all season then the Kings are looking in good shape.

Wayne Simmonds also looked great last night, as he was basically the only Kings' player that could get the puck deep into Carolina's zone. He also set up the first goal of the game with his physical play. I imagine that's not the last time we'll see that.


Jarret Stoll's line looked like shit last night, especially when the Kings moved Patrick O'Sullivan (who was awesome again) up to Kopitar's wing and moved Matt Moulson down. I still think the Kings need Ted Purcell back up to help create offensive chances for that line, otherwise teams are just going to key in on Kopitar. A Moulson-Stoll-Purcell line isn't that bad and could serve as a secondary scoring or stopping line.