Ducks Gameday—Positivity! (Is this the game?)

Share All sharing options for: Ducks Gameday—Positivity! (Is this the game?) 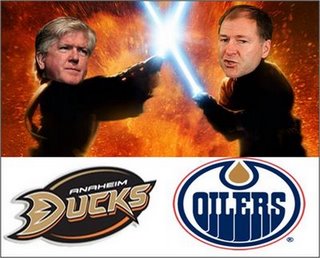 What I was originally going to write about.

Look, I know the Ducks have been horrible lately, but I've caught onto a pattern.

My problem? I'm way too psychic. And I've been focusing entirely too much on the negative.

** The Ducks have been shorthanded an average of 11:14 per game through the first three, and have allowed 6 PPGs to offset their 6 total GF.

**** The Ducks are the only NHL team without a power play goal this season.

Feel free to leave your own semi-positive "Is this the game" hope in the comments. Bonus points for extra cynicism!

Also, this is your 4-times-a-year reminder to read your Oilogosphere -- since internet blogging was invented, the Oilers have had the market cornered -- Battle of Alberta, Covered in Oil, mc79hockey, LoweTide, Black Dog Hates Skunks, Irreverent Oil Fans, Oiloblobosphere, Hot Oil, Copper and Blue -- and quite honestly, I am still leaving out some very good ones. Even if you read nothing but Oilers blogs, you'd get a full spectrum of what hockey fandom is all about. Don't tell that to Burke 'n' Lowe, though; I'd hate for my admiration to spill over to that tasty feud.

Prediction: I'm getting my expectations low enough now that this could end up the first game of the year that doesn't end with a proverbial gun in my mouth -- now that's positivity! Ducks 4, Oilers 2. Goals by four guys yet to put a puck in the net: Perry, Getzlaf, Pahlsson, and Kunitz.