Share All sharing options for: Ducks Gameday—The importance of a good dentist

Well, I don't know if it was a lucky mix of positivity and poetry (Poetrivity!), but somehow the Ducks pulled off a nice 4-game sweep on their road trip, to nicely recover from their 0-4 season start. There's still plenty of things to improve on for the Ducks, but I'm still at the point that I care more that they are getting points than worrying too much about how they're getting them. Suffice to say that it was a fortunate road trip (really? only the third time ever a team has swept eastern Canada?), and it was extremely helpful to score the first two goals in each of the first three games.

But probably the one event on the road trip that probably shouldn't be overlooked was Ryan Getzlaf's trip to the dentist. Getzlaf had a virus removed from his gum that kept him out of the game in Toronto, but apparently the virus was adversely affecting more than just his inner mouth -- his entire forward line showed improvement once the infection was removed from the lineup. Here's the top line's very-much-improved stats from the road trip: 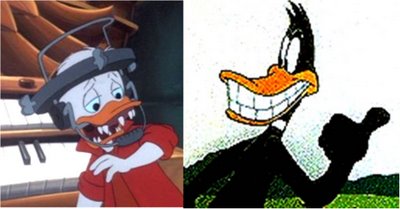 I can only assume this resembles Getzlaf before and after his dental visit.
It certainly mirrors the top line's performance since that pivotal event.

I don't want to seem overly presumptuous, but perhaps it's time to schedule Brendan Morrison for a teeth-cleaning. Ten games in, and he's got 0g-1a-1p and a -5. Just sayin'.

Meanwhile, the Red Wings come into town with a 5-game win streak of their own, thanks to Denis Gauthier's questionable decision-making. Like Anaheim, Detroit's win streak seems a bit illusory as well -- three of the five wins have come in OT/SO, and over the streak they've allowed 3.6 goals per game, which is definitely uncharacteristic.

Here's one stat that definitely differentiates Detroit's win streak from Anaheim's, though. In 5 wins, the Red Wings have outshot their opponents by a margin of 41.2 to 29.8. In 4 wins, the Ducks have been outshot by their opponents by a margin of 25.5 to 37.8. Detroit's also 5-0 on the road this season, and the Ducks haven't won a home game that I haven't attended, so hopefully this battle of the last two cup champions provokes some inspired play from the web-footed ones.

Prediction: Nevertheless, the Ducks pull it out. Ducks 4, Wings 2. Goals by the two-time Wing killers -- the fabulous Niedermayers, Pahlsson, and Pronger. For your Red Wings angles, make sure to hit up Abel to Yzerman, Winging It In Motown, On the Wings, and HockeytownTodd.

[9:30 am edit -- I've just been informed that the Chief over at A2Y will be running a live blog over at his site tonight, and I've agreed to join in the comments there to take my lumps like a good Ducks fan should. Feel free to join in, defend Pronger's elbows, and enjoy a hearty laugh at the persistence of 18-month-old injury excuses.]