Game 1: a sloppy joe of hockey

Share All sharing options for: Game 1: a sloppy joe of hockey 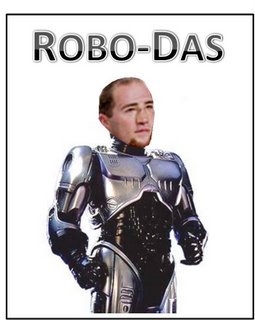 Breaking out the 'ol Sleek "Robo-das" photoshop one more time

Even after the lockout, it’s nice to be reminded that comebacks are completely possible in hockey. The Stars were down 4-2 in the third period after some really sloppy turnovers and it looked like turned to heartbreak city.

In a matter of minutes, the game was tied 4-4 and the was rocking.

Of course, the Columbus Blue Jackets ended up winning in OT after a beautiful wrist shot goal by Rick Nash. It was a really rough, sometimes sloppy game and the Stars should be happy they got a point from this one.

Instead of Fabian Brunnstrom, the new guy to watch might be James Neal. Neal scored a goal in the second period and played a solid 16 minutes tonight.

The most interesting stat line of the night might belong to Stephane Robidas, who might continue the momentum from a postseason that inspired Earl Sleek to nickname him "Robo-das." He managed to register a -2 even though he had three assists.

The Stars certainly have some things to work on, but at least they didn’t leave empty handed.