Kings Gameday: An Elucidation on the Proper Application of Profanity in Hockey

Share All sharing options for: Kings Gameday: An Elucidation on the Proper Application of Profanity in Hockey

As you all know by now, I love cursing. It makes me look cool and people are often intimidated by me because of it. If cursing were a woman I would take it out for a dinner and a movie and then park 20 miles out of town and demand sex in return for a ride back to town. Some people don't like cursing, however, and feel that it's pointless and only done in a desperate attempt to make the offending person look cool. To quote Spicoli: "Those dudes are fags!" But I guess I do see their point; a lot of people simply use curse words interchangeably. There will be "assholes" where there should be "douche bags" and "fucks" where there should be "shits." In order to clear up any confusion and to improve communication in today's society, I've created an extensive but by no means comprehensive list of terms to use when describing hockey players. Hopefully this will help us all, I don't know, fuckin' communicate or some shit.


Asshole- The standard hockey insult. All hockey players are assholes; you can't play a game that gives 5 minute penalties for beating the shit out of someone without being a bit of a jerk. Asshole is appropriate for a variety of situations, from when an opposing player scores on your team ("Man, Kovalchuk is such an asshole") or if a defenseman rails your third-line center ("Hey, that guy hit Handzus! Asshole!") or if a player on your team commits an exceptional boner ("Haha, did you see Brian Willsie try to shoot? What an asshole!") It's important to note that asshole is only appropriate for normal, legal hockey plays; an infraction is worth much more vitriolic language.

Douche Bag- A term derived from some weird thing girls do to their lady parts (you people are gross), a douche bag is a player that does not hold to standard hockey etiquette. He'll slash someone on the hands or jump someone while wearing a shield, things like that. One important note: douche bags are annoying but ultimately they're harmless. You don't fear douche bags, you pity them. Prominent douche bags include Corey Perry and Jarko Ruutu.

Shithead- Very similar to the douche bag, a shithead also goes against hockey code. The key difference is that they're bigger and use their size to take advantage of other players. Think Ben Affleck in Dazed & Confused. Shitheads will jump young players after some perceived slight or take a scrum as an opportunity to cross-check your best player in the back of the head. Shitheads are a dangerous part of the game and must be stopped. Another term that is acceptable is dickhead. Prominent shitheads include Chris Pronger, Brendan Witt, and, after Firday night, Donald Brashear.

Pussy- The term pussy when used as a noun does not exist in hockey. All hockey players, even guys like Ladislav Nagy, are tougher than all of us. Pussies are guys in every other sport besides rugby and linemen in football. Pussy can be used as an adjective, however, to describe certain actions that would be acceptable in other sports but not in one as manly as hockey. Guys that take dives (Mike Ribeiro) or guys that milk injuries (Mike Ribeiro) or guys that hook people in the nuts (Mike Ribeiro) are committing pussy acts. Guys that engage in pussy acts include Mike Ribeiro.

Dipshit- "Dipshit" is a unique curse word because it used almost exclusively against one's own players. It usually denotes a player that seems to be actively harming your team with his boneheaded moves. It is usually an older player that sucks at defense. They'll make a mistake and then you'll shout, "You fucking dipshit!" The words "moron," idiot," "dumbfuck," and "dumbass" are also acceptable if you feel like mixing things up. Prominent dipshits (at least for me) include Len Barrie, Craig Johnson, Kelly Buchberger, and Brian Willsie. 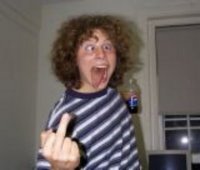 Fuck- The greatest of all curse words, "fuck" is known for it's diversity. It can be used as an adjective to accentuate another curse word ("Chris Pronger is a fucking shithead"), a direct insult to a player or an opposing fan ("Fuck you!") or it can be used on its own to denote a player that you just plain despise ("Sean Avery is a fuck"). You can even use them both together, like so: "Sean Avery is a fucking fuck." Alternately, you can put the word "mother" in front and create a whole new word that either be derisive ("You mother fucker") or laudatory ("Alex Ovechkin is a bad mother fucker"). I suggest taking the word, rolling it around in your tongue and finding what works best for you.

Hoser- A Canadian word. I don't know what it means. Moose thief, probably.

Weiner- A special word reserved for Rob Blake. A weiner is a person that screws you over and over again, to the point where you kind of expect it. He's like Pokey from Earthbound. The only consolation you have is that the weiner sucks (ed. note: teehee) and is not worth even worrying about. Still, hearty booing at the mention of the person's name is encouraged if not expected.

I hope this brief list helps you all properly elucidate your ire to the opposing team. Feel free to add any personal favorites you might have in the comments.


I'll be at the game tonight in the pretty people section. If you see me just kind of keep walking; I'll be with my mom and I told her I write a blog about living like Jesus.

Prediction: Kings win, 4-3. Goals by Kopitar, O'Sullivan, Frolov and Doughty. Rob Blake gets booed mercilessly. I get in a car crash on the way home and die a happy man.